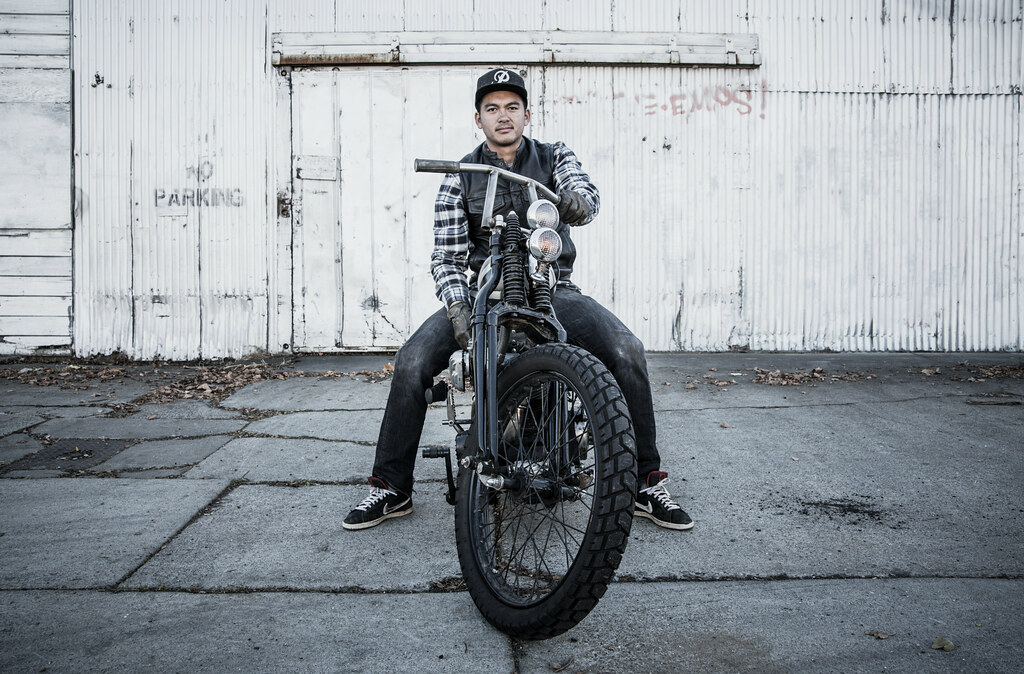 What made you transition from a Honda to a Harley?

I was ready for a change in riding style. For the longest time I was really into the scrambler and cafe style bikes and the shadow VLX was a very interesting platform to tinker with at the time. However, that motor was too weak for me and the bike wasn’t an appropriate set up for camping trips.

I really got more into choppers when I started riding with the LNSPLT guys. They made hardtails and suicide clutches seem super fun and easy and I had an itch to learn a different platform. I needed something cheap with a big motor, low-tech, sketchy, and garage builder friendly. 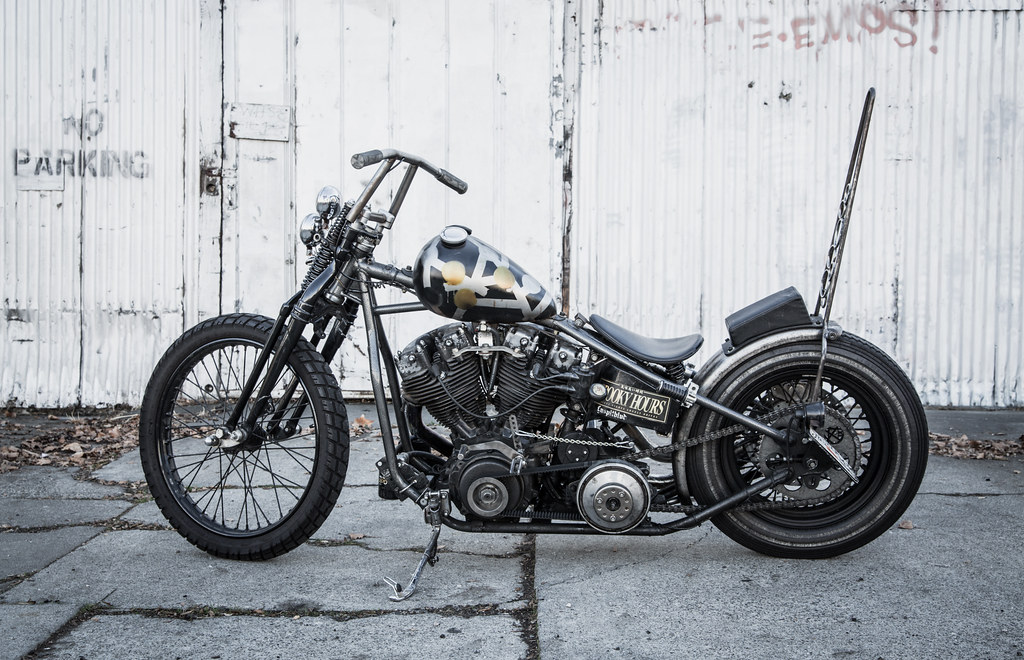 There is a lot that I really like about the bike itself, but I really like that I have been meeting a lot more people in the Sacramento area that are into choppers. Building this bike has introduced me to a lot of really nice people and really fun events. I also like that there is so much information readily available out there for old Harleys.

I kinda hate that I moved on so quickly. Kinda… 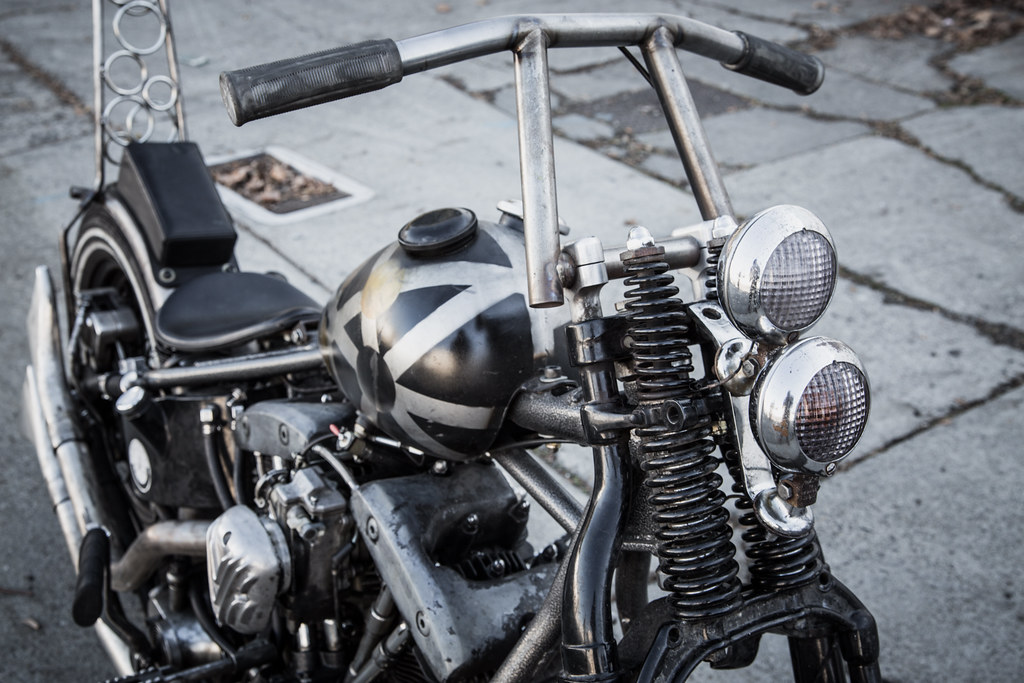 Between the two, which bike do you enjoy working on and why?

I never have to work on the Honda because it’s so reliable so I guess I’ll have to say the Harley haha. I’ve put a lot of work into the shadow to make sure it is solid. I am now trying to get to that point with the Harley, which is proving to be very elusive! It is true that these things take a lot of attention to keep them happy. I will complete some maintenance items over the winter that will hopefully keep more oil on the inside. 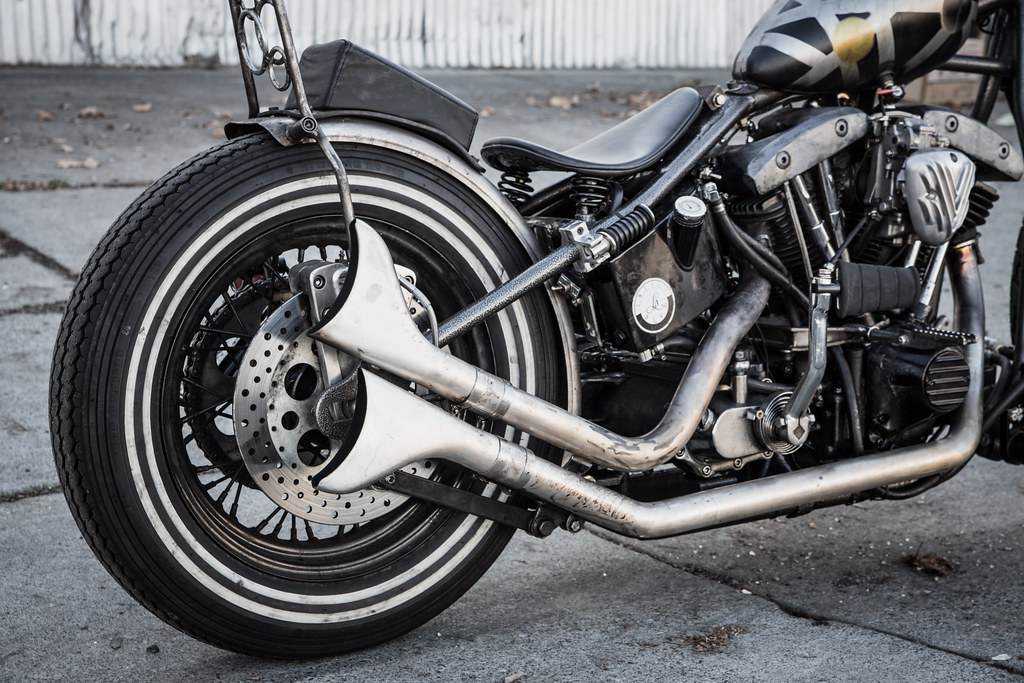 Who or what inspired your build?

I was first inspired by the builds over in Japan. I first saw a photo set of some really tough, dirty looking bikes with car tires and open primary chains. I wanted something sketchy and exciting and I wanted to do as much as I could on my own. The “Final Form” has changed a lot in the short time that I’ve owned it. 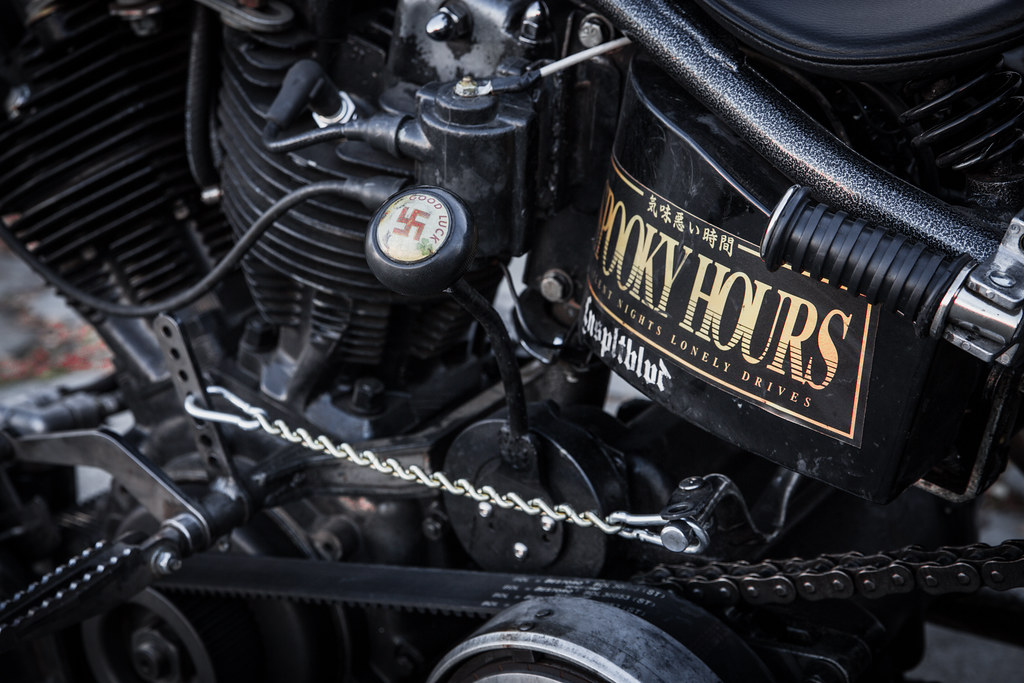 You’ve recently competed and won the Lnsplt Build-Off. Can you tell us about your experience?

I started this build about 3-4 months before the build off. I wanted to give myself a ton of time to learn everything and that meant that I had to get it running reliably before I started any customization. I was pretty stupid with it too. I would go out and ride with no tools and no AAA , so of course, I got stranded. I broke everything that was put in place by the previous owner besides the frame and fork. My goal was to expose all of its weaknesses and build it up my way.

My “vision” for the entire process was all over the place. I couldn’t settle for anything and I would daydream about different combinations of parts. Often I would proclaim that I was going to do something specific for my bike and then end up with something completely different. For example, I didn’t mean to paint my tank this way. I was trying to do a tank with half stripes and half polka dots but instead, I got frustrated in my inability to tape things off correctly and just ended up with what you see now. So many people hated my tank, especially Brian.

The Lnsplt Build-Off is just a friendly competition that serves as a reason for people to complete their builds. All of the builders have their own idea of what is cool/pretty/whatever so it was really exciting to see the builds come to life. I was surprised that I was voted the winner because the other entries were so solid and detailed. I’m really glad that the trophy stays in Sac! 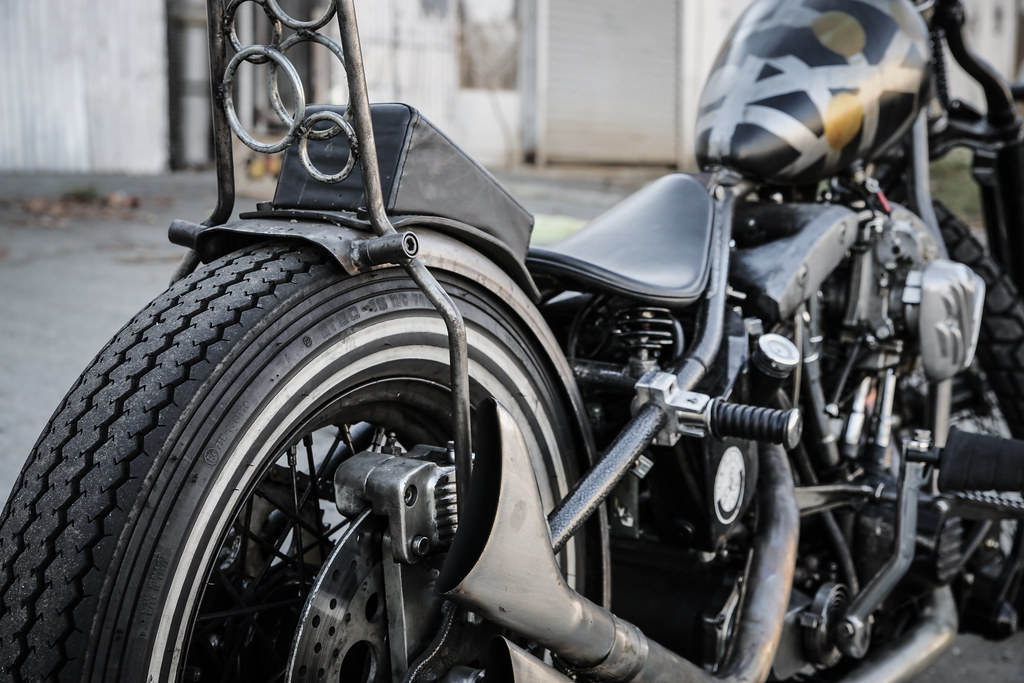 What are your plans for the bike?

My next plans are to dig into the tranny and the motor to do some maintenance work. I need to address some oil leaks and also make sure that things are adjusted properly. 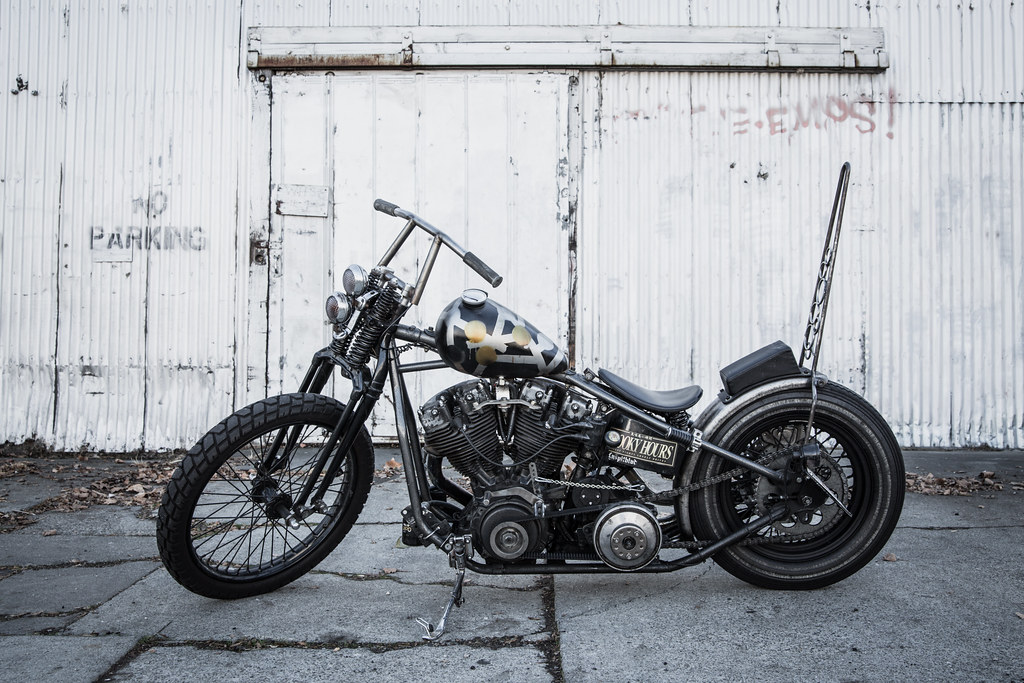 Yes. Don’t start down that path unless you really like the challenge. I personally find it meditative to take my time in the garage. Also, make sure your bike runs before you chop it, hahaha. SBFFSB (Shovel Bros Forever, Forever Shovel Bros) 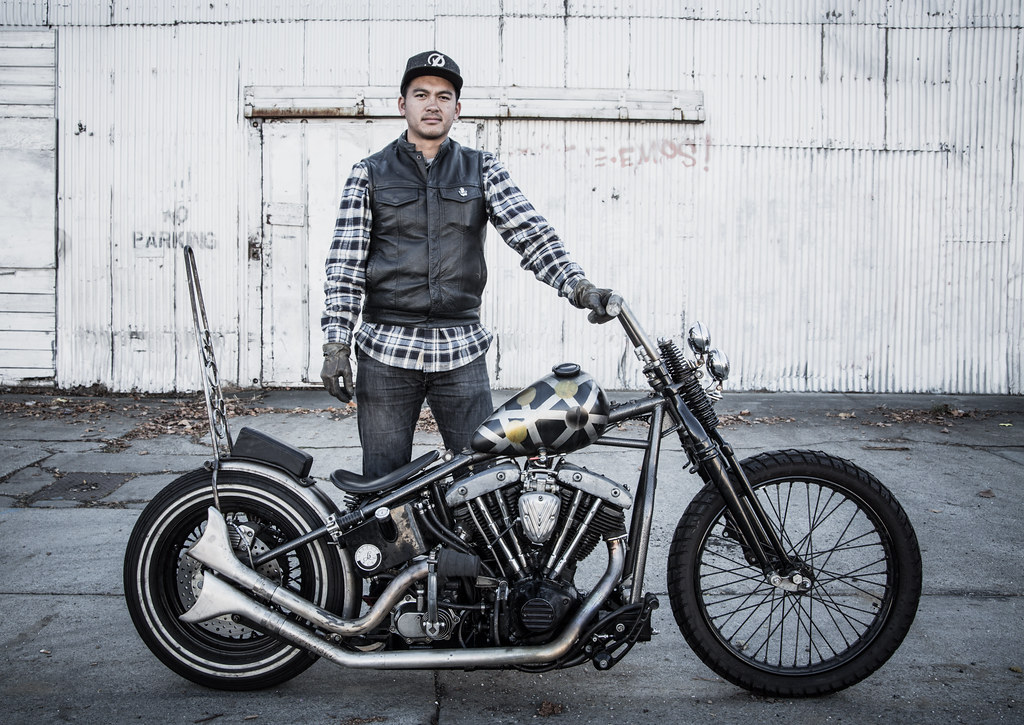