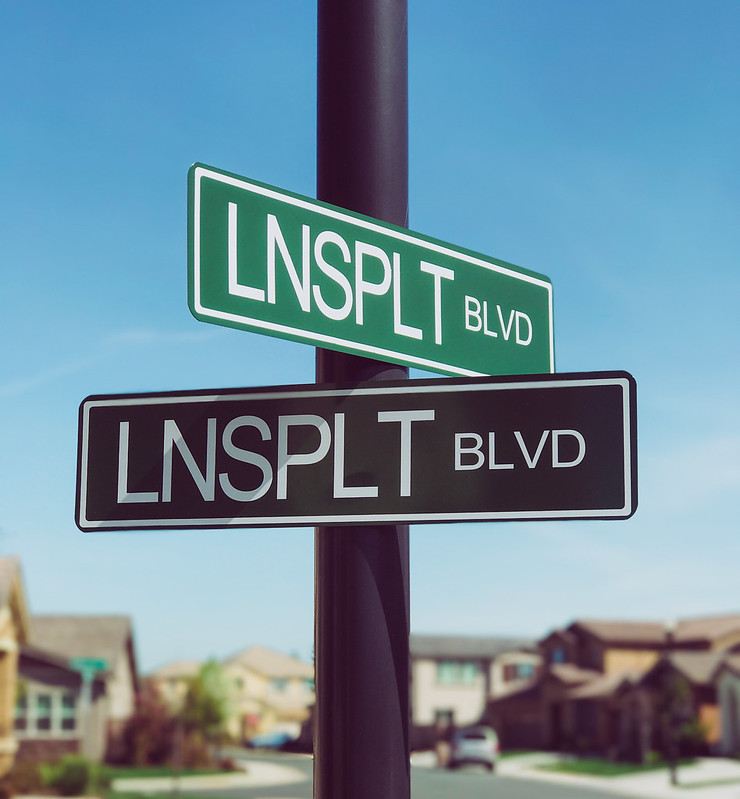 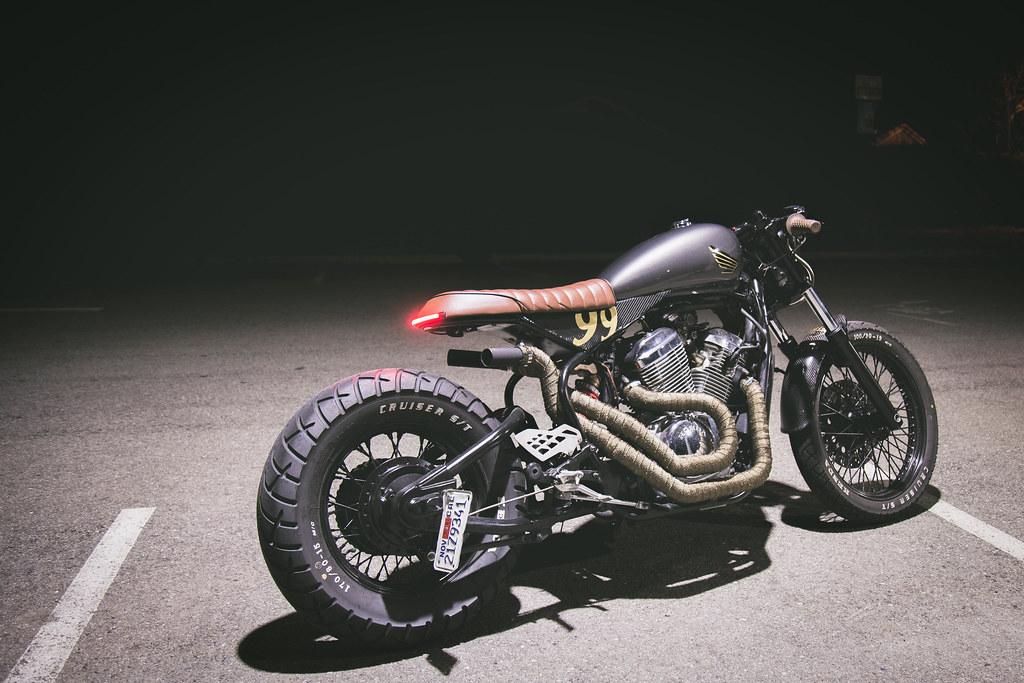 What inspired you to build the bike you built?

I’ve always wanted to build a cafe or brat style bike ever since I first saw them. The LNSPLT build off actually inspired me to do it in the first place. I planned to sell the project Honda Shadow I had already built to buy a bike that had more of a “cafe” styled frame already. It wasn’t until Brian showed me a few examples of the Shadows he had seen floating around the internet that I really started thinking about using the Shadow as a cafe build. He has a Shadow in the works himself, so it gave me inspirations to incorporate a cafe racer design cues wherever possible on my own Honda cruiser. 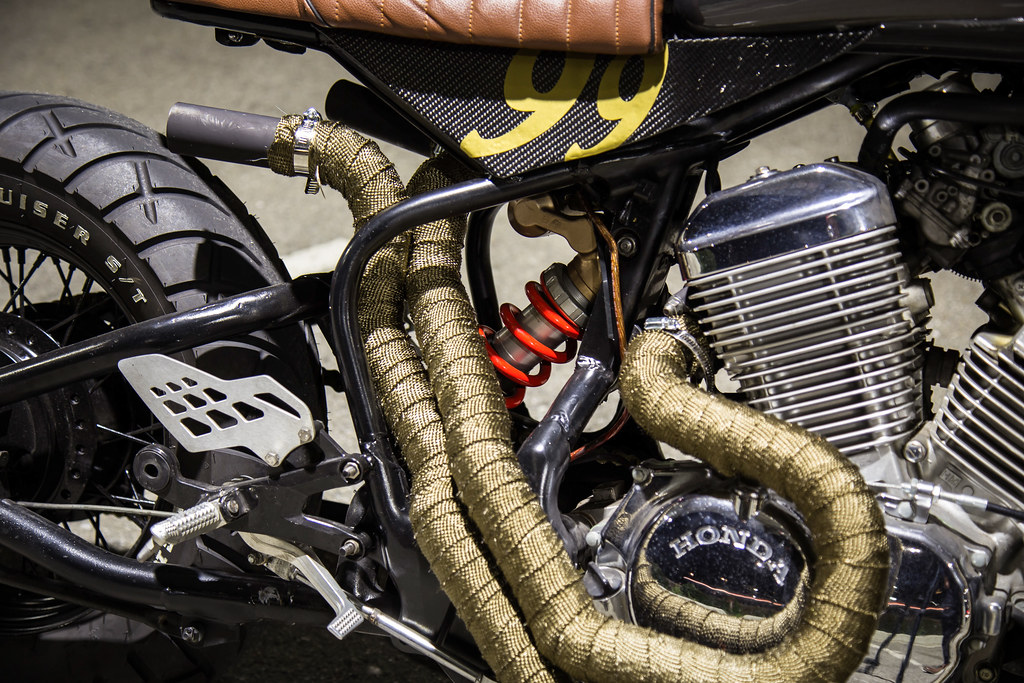 What were the challenges that you faced during the build?

There were more complications with his build than I anticipated; where do I even begin? The greatest challenge was figuring out how to build the sub frame to give the bike a straighter line. There weren’t any parts made for converting a Shadow into a cafe so I essentially fabricated everything. Through the time effective method of trial and error, I ended up with more scrap metal at the end of this build than what actually went on the bike. Another challenge was trying to actually fit a shock made for a BMW s1000rr into a bike never made to have a shock with a piggy back. 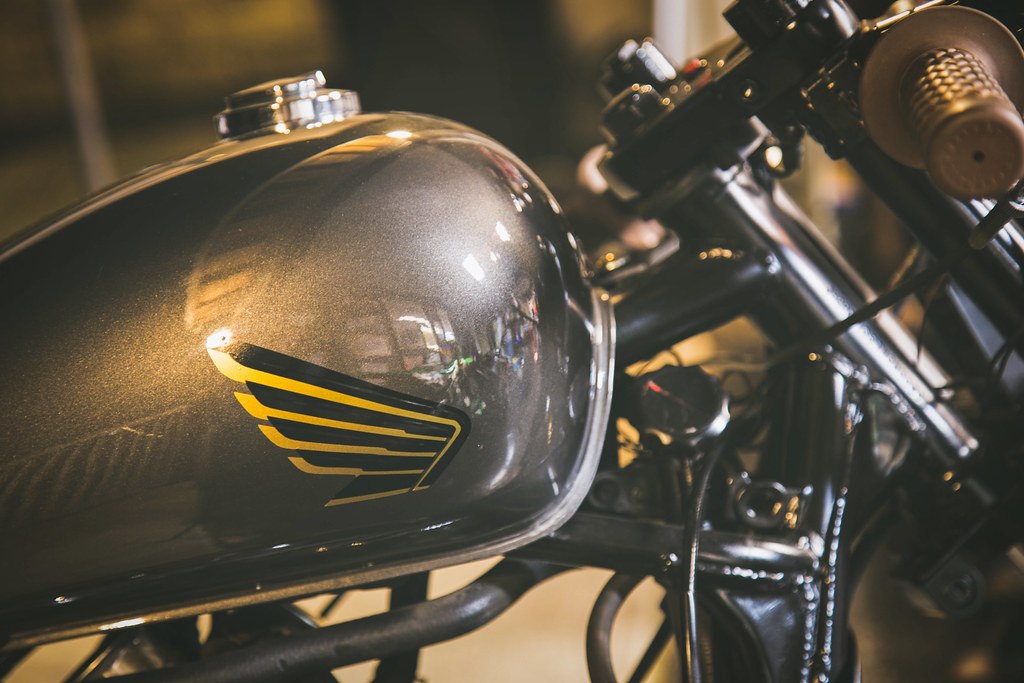 What did you enjoy most about this build?

My favorite part of the building process was the comradery. It felt like the days I first got into building bobbers, my buddy Brian was over everyday wrenching his brainchild right next to mine. Other friends would come by and we would sit around, drink whiskey, and talk bikes. We didn’t get much done those days, but those are the moments I remember from this build. My favorite moment was when I got her to fire up and idle correctly. That was the night before the competition. We really worked down to the wire. Young and Dennis rode beside me for my maiden voyage. The joy I felt was indescribable. 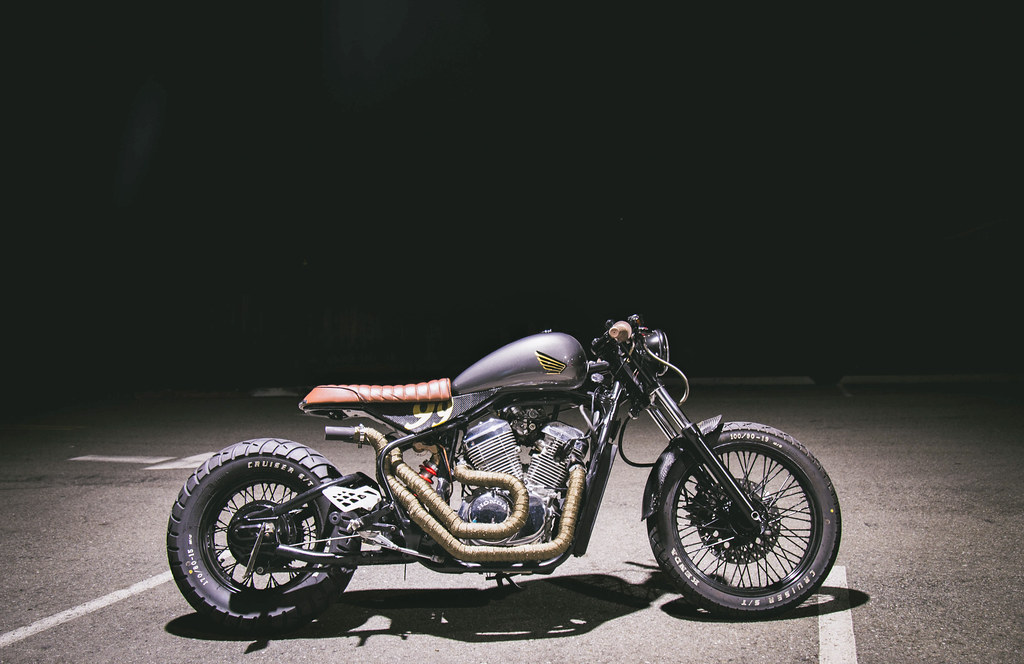 You came from a bobber background. Do you like the cafe style? What are your plans for this bike?

This bike has to be the most beautiful bike I have ever built. It’s just so goddamn pretty to look at. Riding it, however, wasn’t my style. I used to ride sportbikes so I am no stranger to an aggressive seating position. Having a great suspension set up really made it feel like I was riding on clouds (compared to the hardtails I’m used to riding.) It just isn’t as fun to ride as my bobber. With my bobber, you feel the road when you ride and it just puts you that much more in the driver seat. 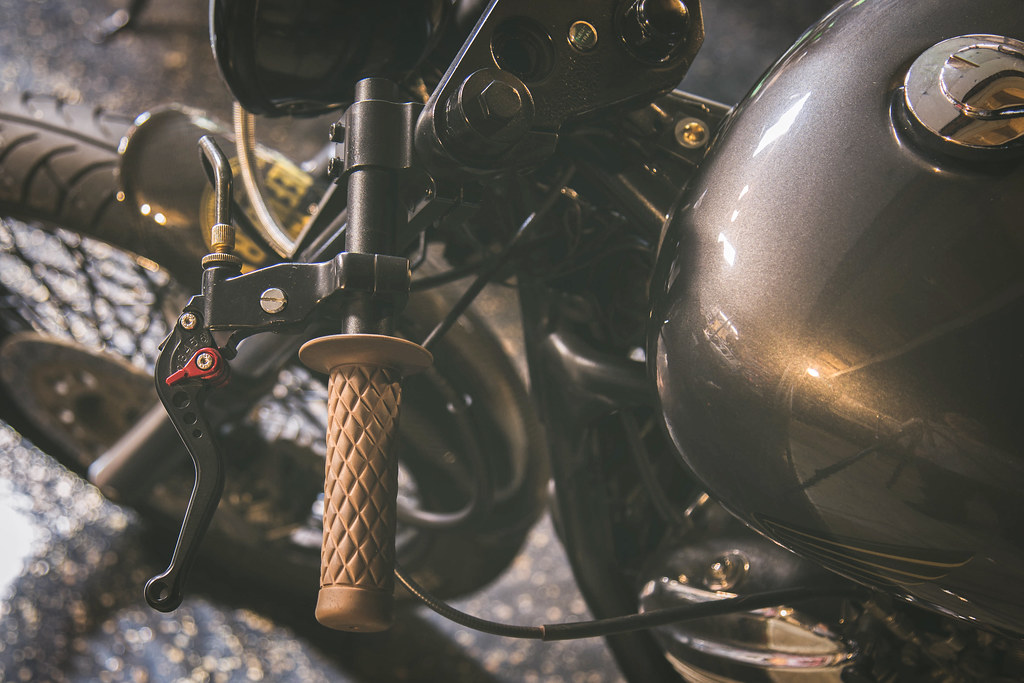 You’re one of the few with a cafe/brat VLX. How do you feel about that?

Sometimes when I say it aloud, I feel proud. But in all honesty, I don’t see it as anything too crazy. There are so many crazy builds out there and I am just a garage builder. I had no fabrication background besides the hours i spent on youtube and sitting there practicing what I just tried to absorb from a monitor. All I can say is that my work is a reflection of how much I put into it. I couldn’t be any happier with the way the bike came out. 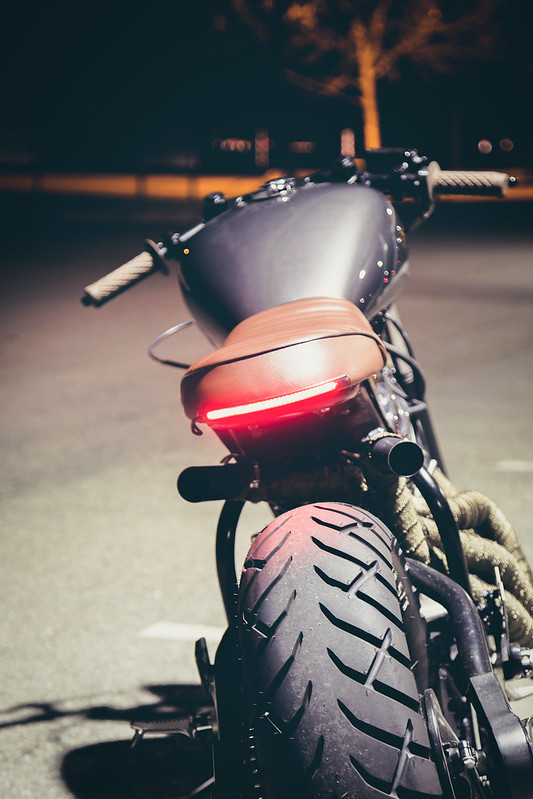 Tell us a little about your born free 8 experience

Every year we go on a trip called “Born Free” and I always have the time of my life. A band of brothers riding down HWY 1 on custom bikes, camping midway down to attend one of the largest custom chopper/bobber shows–what could be better? I saw it as an opportunity to show off all of my hard work. Right off the bat, I lost my GoPro Hero 4 when its mount broke. Not the best start, but I didn’t let that phase me. Everything was how I expected and my head was in the clouds…until I crashed. We had pull off the highway in Hollywood and we were about an hour away from the house that we rented for the weekend. I was eager to rendezvous with the rest of the crew.

As we were getting back onto the freeway, we started merging over to the carpool lane. The car ahead of me had a few good car lengths so I check my shoulder to merge over. I must have missed something because when I turned my head around, it was too late. All I saw was the backside of a white Corolla. I tried to swerve to the left but clipped his bumper. My buddy riding behind me said there wasn’t traffic ahead and didn’t know why the car was applying his brakes. All I know is that what was likely only a couple of seconds, felt like an eternity. My heart sank as I saw that car. I hit the pearly white Toyota going about 70mph.

It was like a slow motion movie scene. I saw the front tire from an angle I was unfamiliar with. I don’t know how many times I flipped but I recall landing on my feet for a split second, before being thrashed head over heals again–and not in the good way.

The last thing I remember was sliding chest down across the asphalt. I tried to get a grasp the pavement, desperately trying to stop myself. When I finally came to a stop, the first thing I could think of was my bike. In my mind, there was a great weekend to be had still! I had a mild concussion and limped across the lanes to get out of the highway. Luckily for me, a stranger on the road stopped his truck to shield me from traffic so I could move out of the way. He then gave me the last of his water and helped me take off my helmet. Faith in humanity restored! Like a knight in shining armor.

My buddy Jonathan, who was right behind me, drove against traffic to help me muscle my bike out of the middle of the freeway. I sprained my ankle pretty badly and had a lot of road rash, but luckily, nothing was broken. My denim vest absorbed much of the abrasion from skidding across the asphalt. The driver? Continued on their merry way. Maybe they were awful human beings, maybe they didn’t realize they were hit by a motorcycle traveling at 70 miles per hour.

The rest of the trip is hazy to me. I was so drugged up on muscle relaxers and painkillers that I don’t remember much else after that point. Big shoutout to Jonathan for what you did. I would have never been able to pull that shit out of the road. Also big thanks to my girlfriend Lyn, for not killing me when she found out I wrecked. She nursed me back to health and dealt with my crybaby ass. 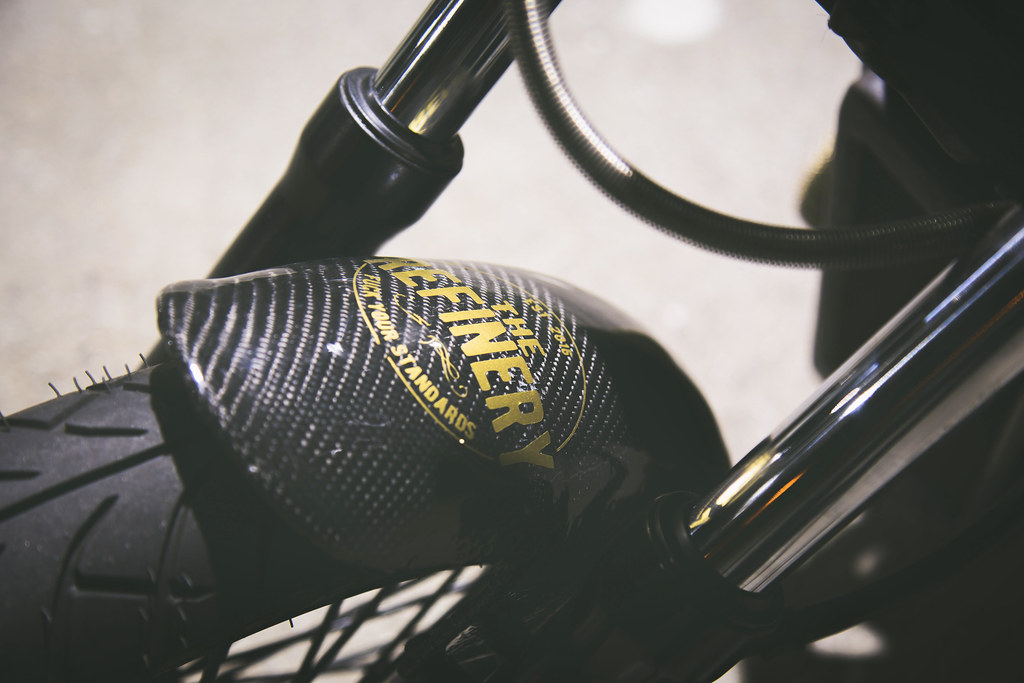 Why do you still ride after all that?

People always ask me why I still ride after that, and I tell them simply: because I love it. I still ride because there is no greater feeling than being free on two wheels. I’ve met some of the greatest people, and I’m sure I  will continue to meet great people on wheels. All of my senses are heightened when I ride. Trees look greener, the wind feels smoother, even the air smells nicer. You overlook so many scenic views and forget how beautiful our world is when you are looking at it from behind the glass of a car. It’s so easy to be on the phone, or engaged in conversations, that you miss out being present and enjoying the ride. Sometimes I catch myself just smiling for no reason. “We all die, but only a few of us live.” This is me living out loud. 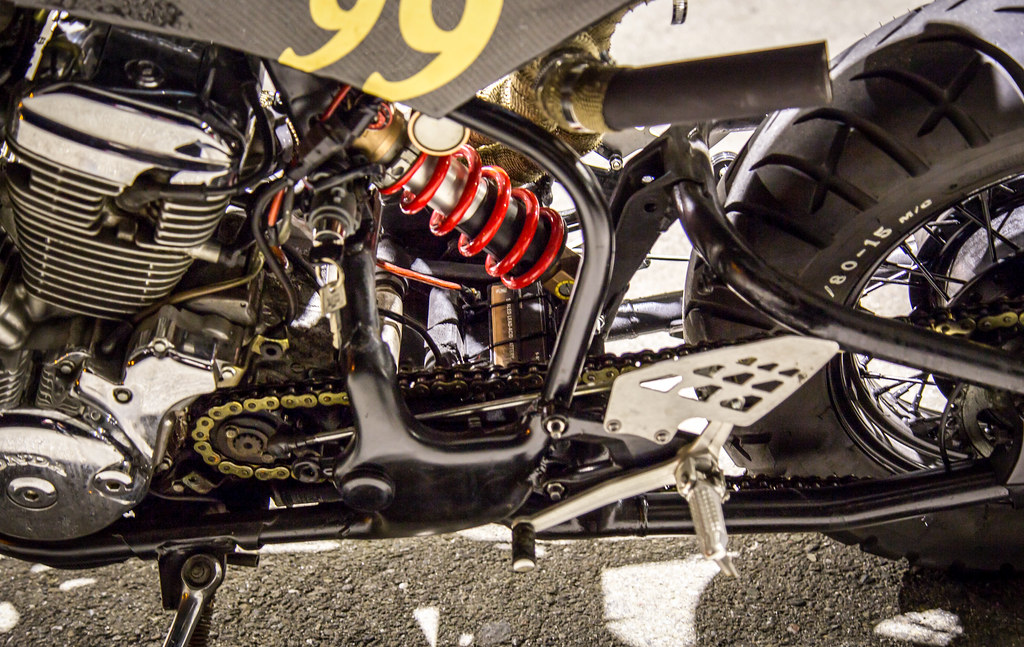 Next on the list would be building myself a Harley. I will always have my shadow bobber but I would love to add a Harley into my stable. 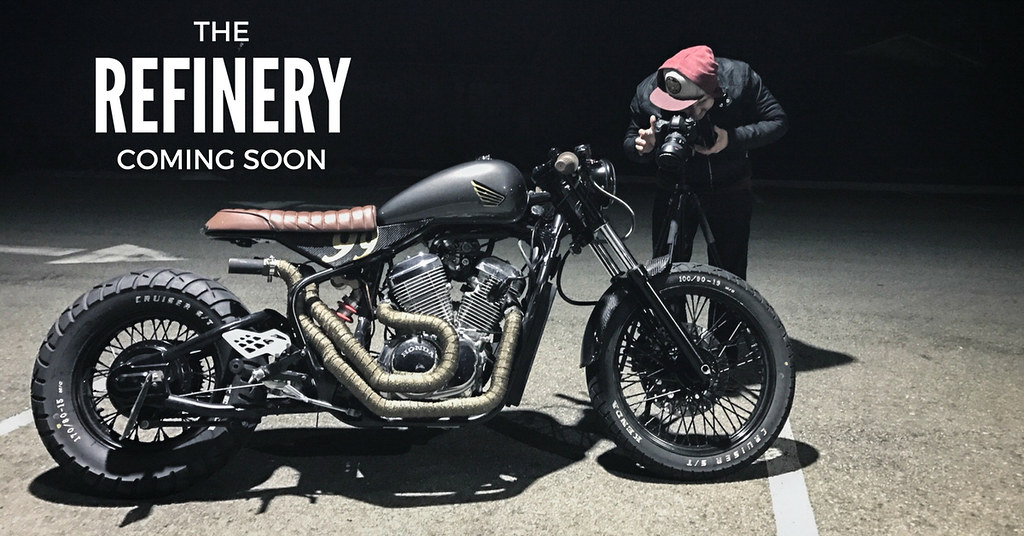