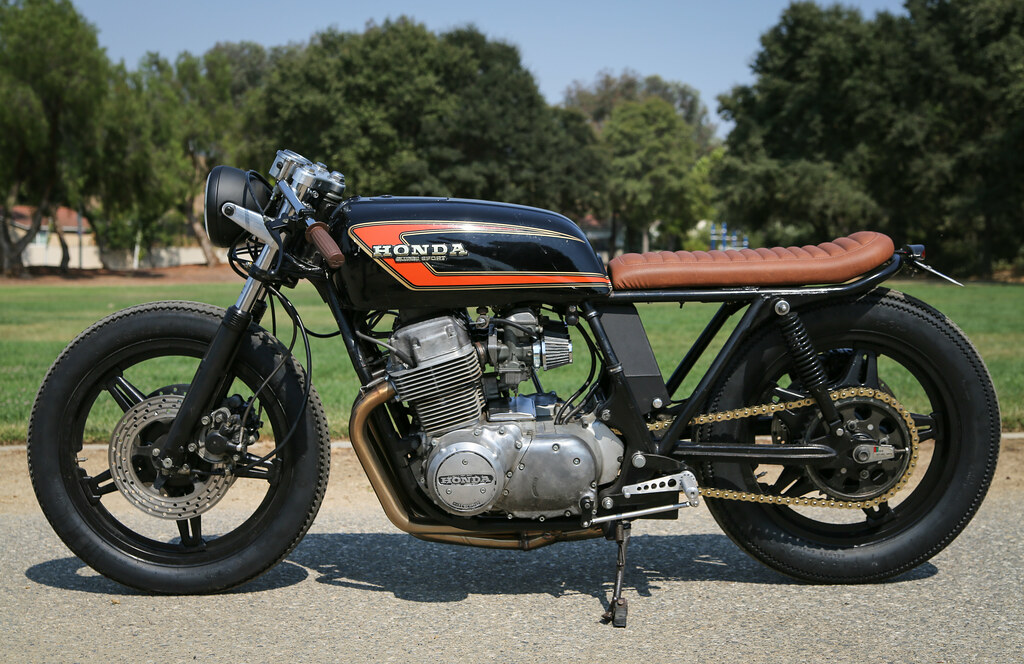 Tell us a little about yourself. How did you get into motorcycles

I have always been a motoring enthusiast, anything and everything that burned gas and made cool noises fascinated me. It didn’t matter American, Japanese, European, 4 wheels or 2, it was all interesting to me. This passion began with wrenching with friends in my parents garage all through the night on whatever crappy cars we had in high school. One by one, my friends slowly started getting into motorcycles, then came Lnsplt Blvd… It was inevitable. 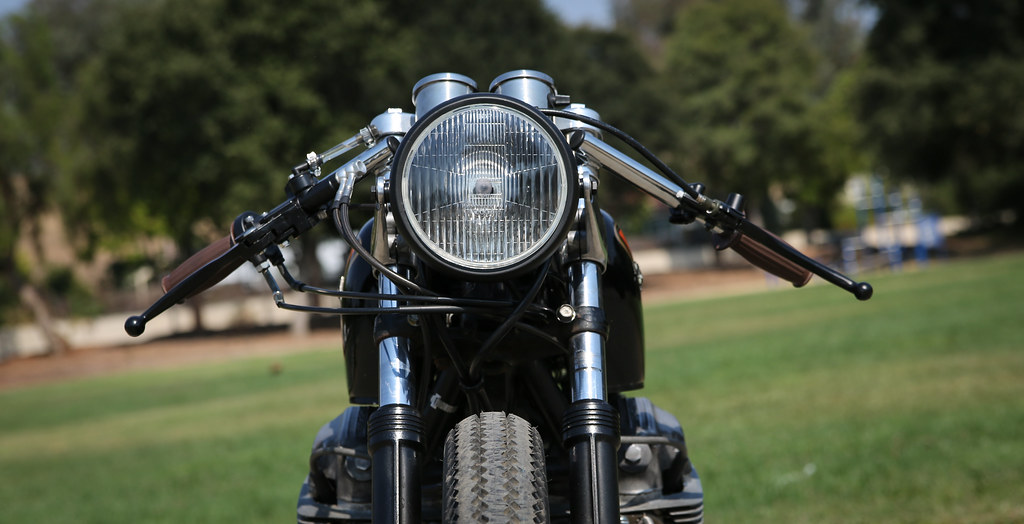 You could’ve picked any motorcycles to start with. Why a Honda? Specifically yours

First some back story: my first car was an Integra, The most fun car I’ve owned was an s2000, my parents drove Hondas while I was growing up, Hondas have always been familiar to me. A few years ago I attended a car meet and met a guy with a MINT CB500. It immediately stuck in my mind, the sound, the look, the feel, it was amazing! I decided in that moment that I had to have it. I began to research and the more I learn about the early 70’s bikes the more I feel in love. I eventually decided I wanted a CB750 because 1) I am not 5’3” and, 2) more (power) is always better. Then one by one I found the specifics of what I was looking for, pre 79 because single overhead cam, F type / Super Sport because dual front disc brakes, single disc rear and the best looking gas tank of the decade, black because black. Just thinking about how unfamiliar I was to carburetors, point’s ignitions systems, and kick starters got me very excited. I eventually found a suitable candidate 3 hours south, borrowed a truck and went to pick it up. It didn’t want to start or idle, ran a little rough, misfired and bogged but it had the original paint, and a cool back story of its own, I was sold before I even saw it. 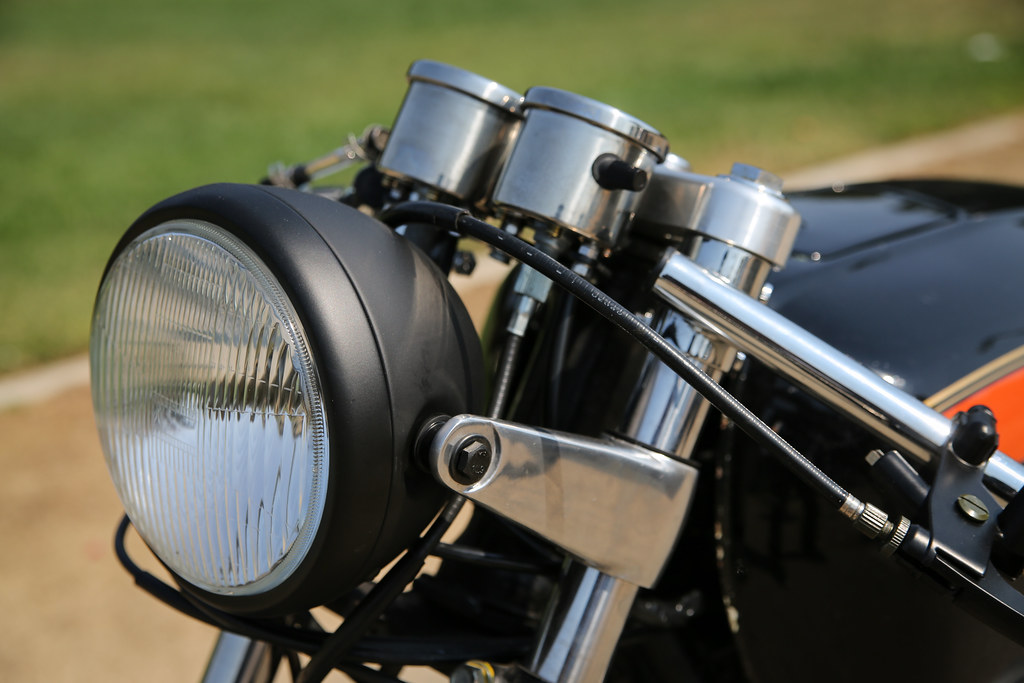 How did your parents react?

Well…It’s easier to apologize than to ask for permission… Just kidding they knew but they didn’t really care too much. 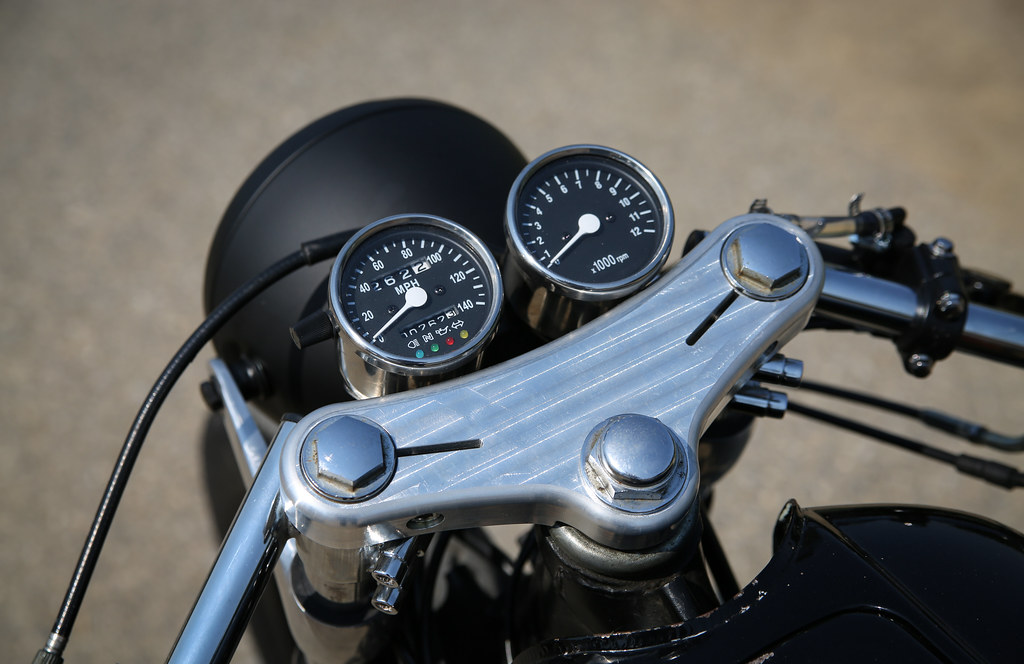 Have you gotten any close calls?

I have had people not see me and change into my lane, other than that no. 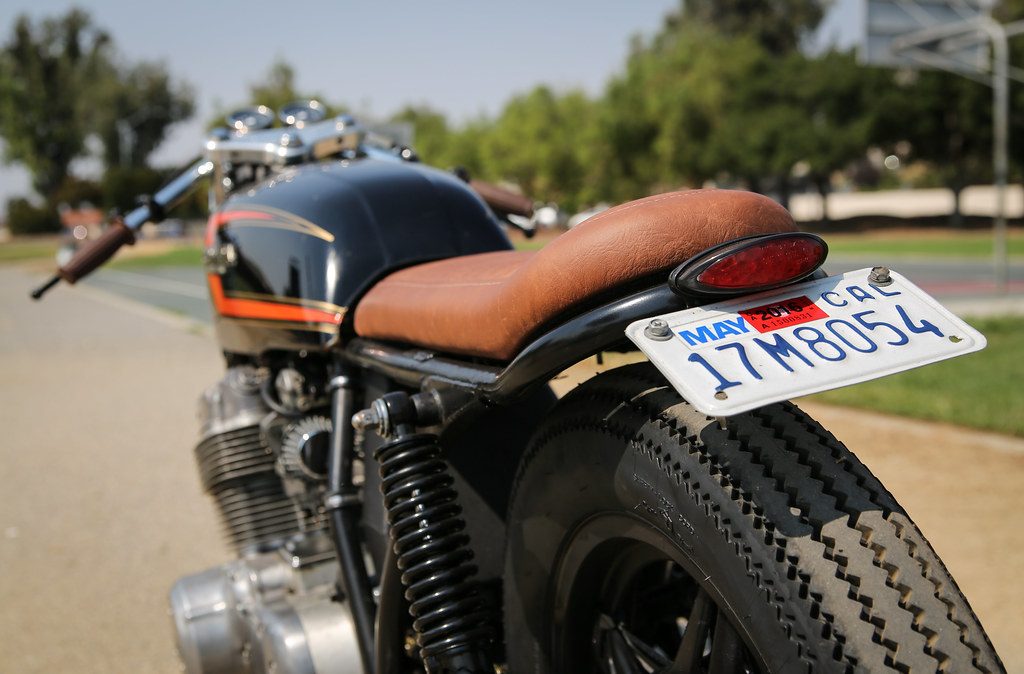 You came from a car background, how similar or different is working with bikes v.s. cars?

I like both, but I would definitely say working on bikes is easier just because you spend way less time laying under a car or bent over in weird angles trying to reach bolts and stuff. Bikes are more exposed and therefore a little more wrench friendly. Simplicity is also another plus, vintage bikes especially are inherently less complicated, there is just less to worry about. 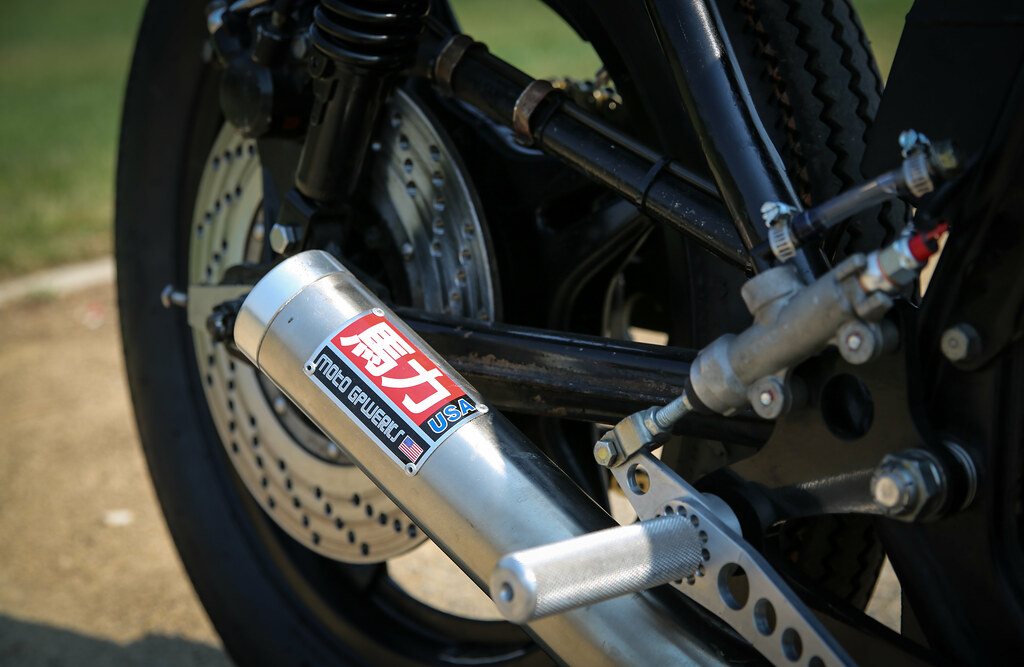 What do you enjoy most about riding?

Freedom, you forget about everything and just focus on staying alive, it’s pretty great. 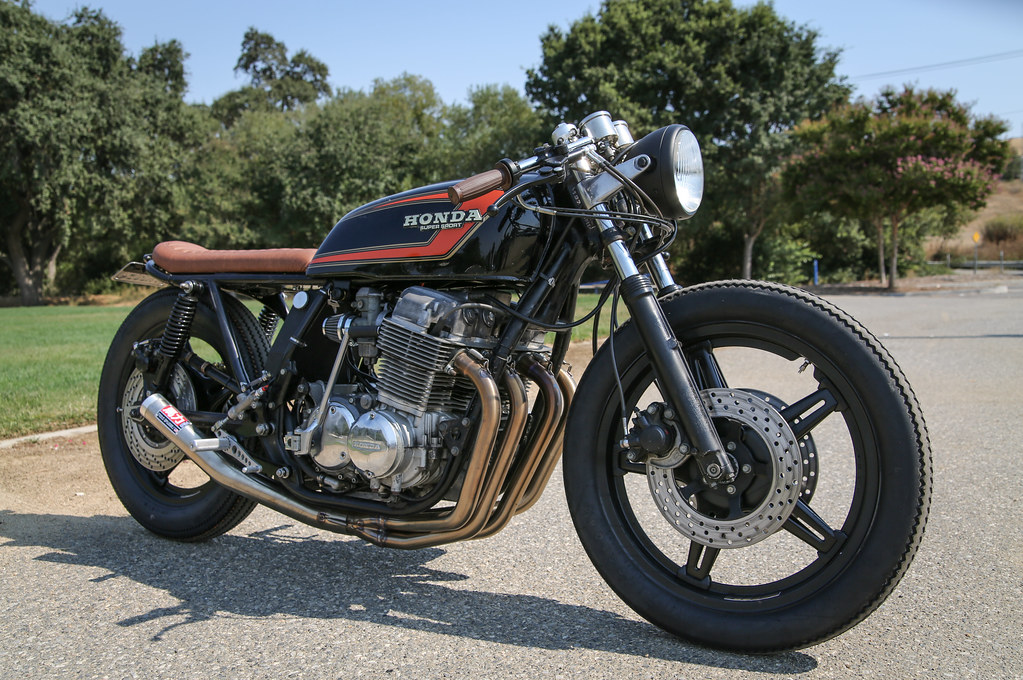 Your bike is pretty flawless. Who or what inspired you to build it the way it is?

Flawless is more credit than it deserves. Luckily for me Honda built a little over half a million CB750’s between 1969-1978. That’s a lot of bikes, and a lot of creative builders have done all sorts of things in the last 40 years. So I hunted for the parts I wanted and look I was going for. Eventually I ended up with this. 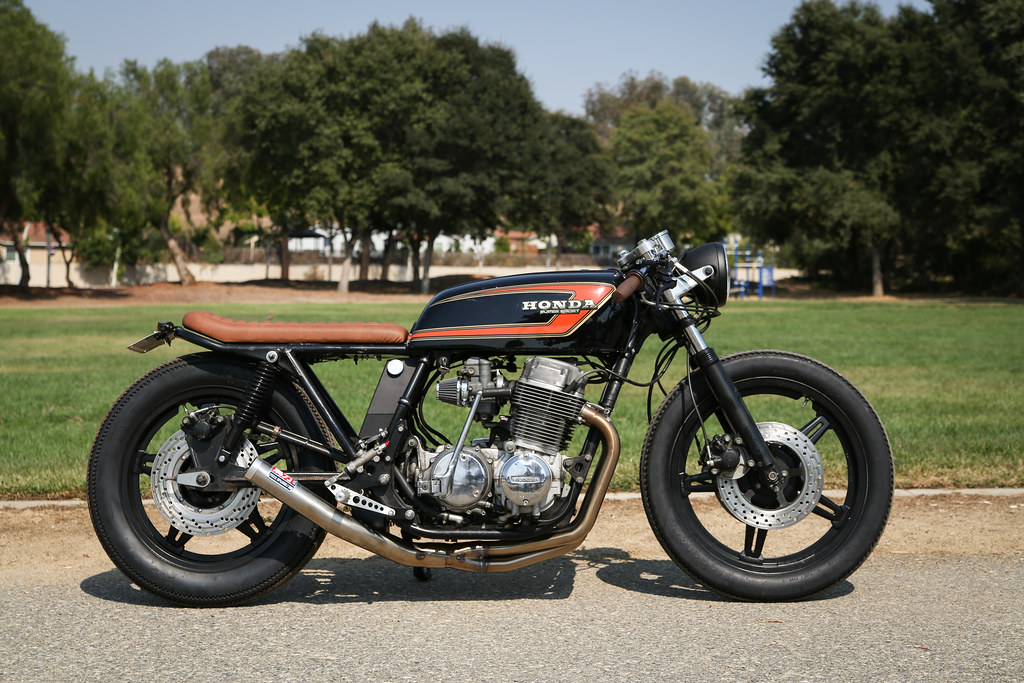 What’s next for your bike?

Since the pictures were taken I have raised the rear of the bike a little using different shocks. Shortened the handle bars a few inches and changed out the clutch and brake levers. New tires are in the mail, vintage firestones look cool but perform like shit. Spoke wheels would be a much welcome change although it gets complicated and expensive when wanting spoke wheels and retaining my brake setup. I have begun drafting up ideas for my next seat setup. I am looking for a spare 77-78 F type gas tank so I can paint it. I want to run a modern inverted front fork setup off of a mid 2000’s GSXR or similar bike. Ultimately I would want to strip the bike back down to the frame clean it up further and powder coat it. Lastly, I want to build the motor eventually, 836cc is pretty common and easy to do. The cherry on top would be Keihin CR race carbs. 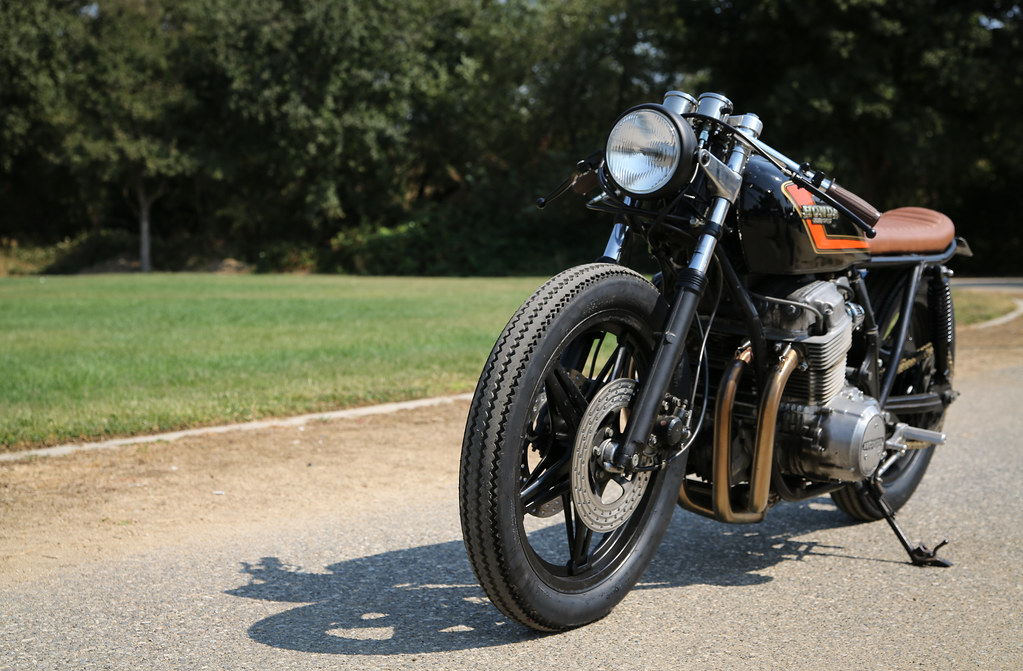 This is your first bike and I’m sure it won’t be the last, What bike are you planning to pick up next?

I am really interested in building a bobber right now so I am looking for a shadow 600VLX. 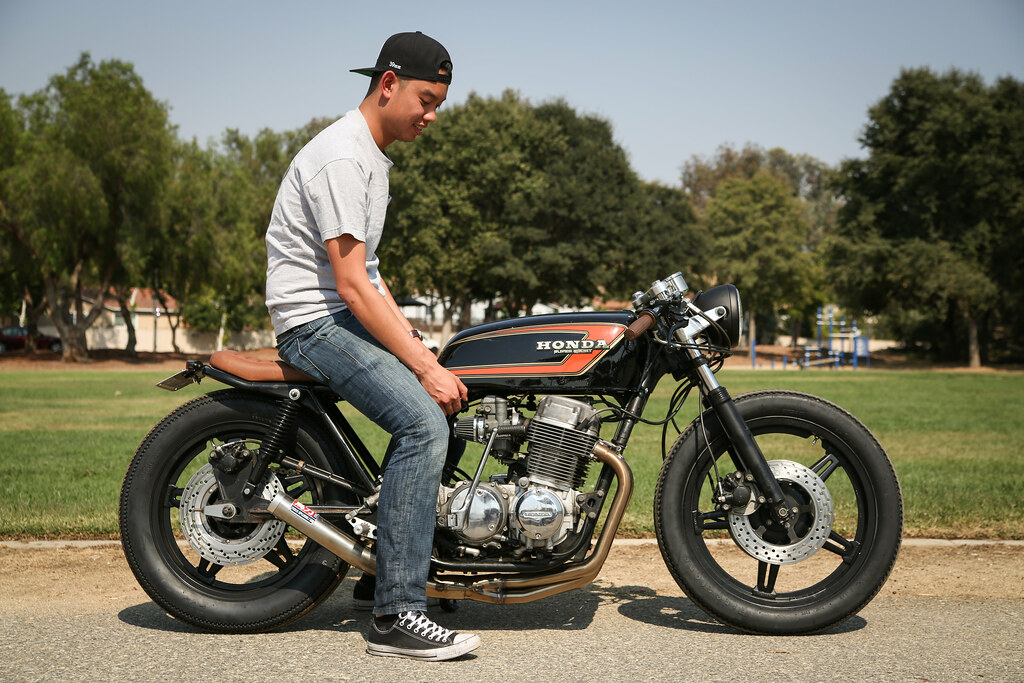 Any tips for new builders/riders?

Have fun, be safe.