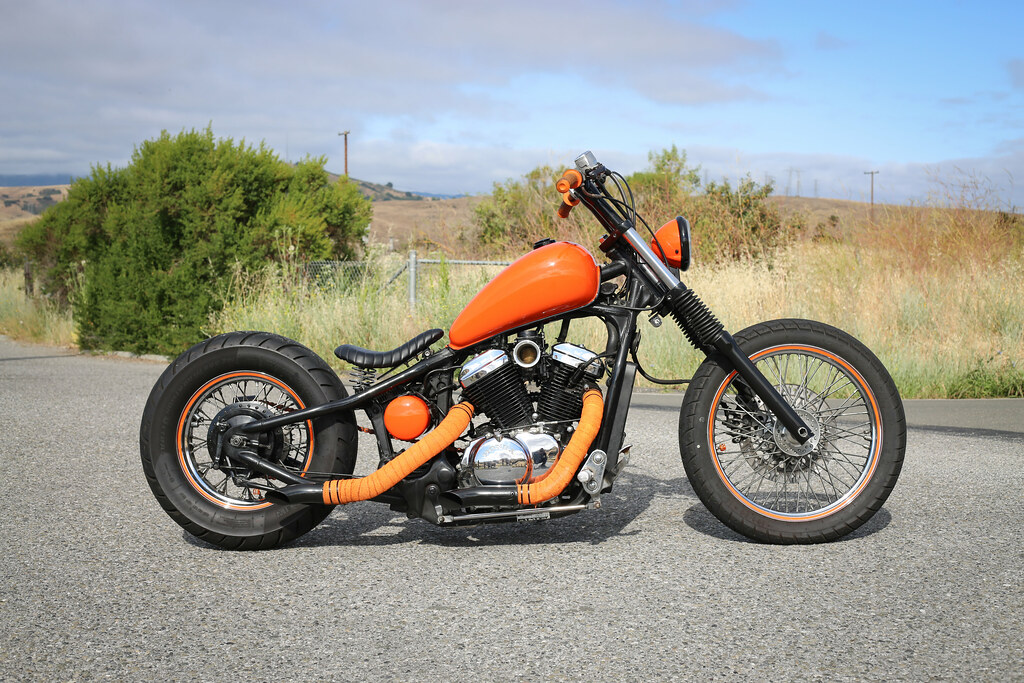 Tell us a little about yourself

My name is Jonathan, born and raised in San Jose, CA. I just turned 30 and I’m one of the oldest guys in the group; I’m still young at heart though. I’ve done a lot of things through my life’s journey up to this point. One of my proudest achievements was as a high school wrestling coach I was fortunate enough to coach my little sister. She went winless her freshmen year; less than 3 years later I was in her corner as she wrestled in the Finals at Nationals. It’s an indescribable feeling to see those you care about succeed. I also did some amateur bodybuilding during my late teens, which taught me a lot about dedication, determination, and sacrifice. These are things I’m grateful to have learned early on in life. 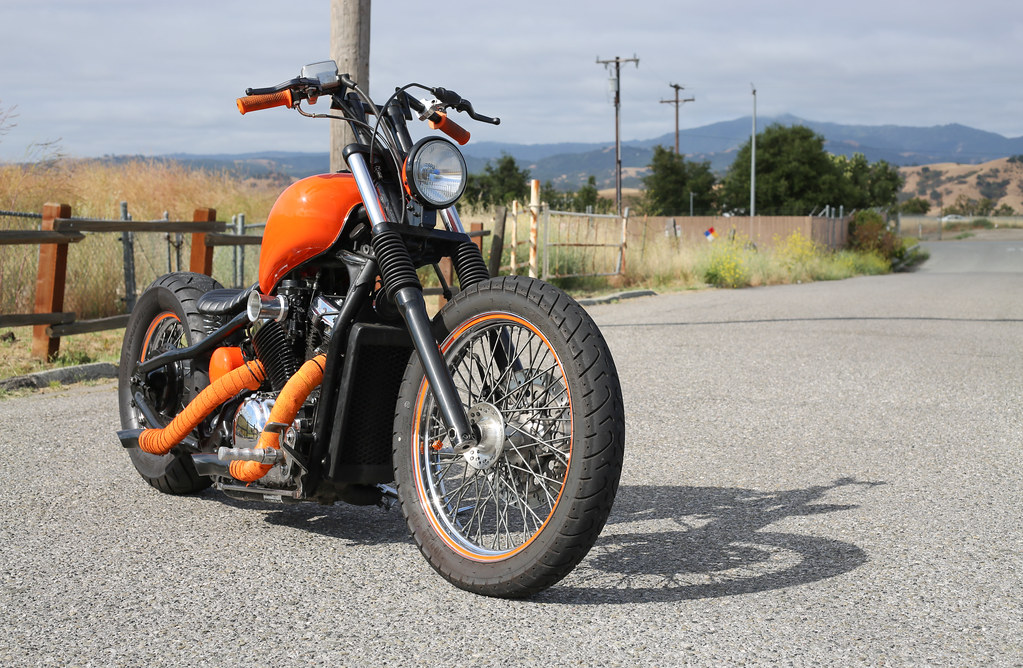 Is this your first bike? if not, what and when did you start riding?

My first bike was actually a Yamaha R6. A buddy of mine was looking to upgrade to an R1 and sold it to me for a player’s price. I never got into being a hardcore rider and used the bike more as a commuter. Less than a year after I got the bike I popped it up on accident and totaled it. I walked away from the accident. As soon as I got home I was on craigslist looking for another bike. That was 8 years ago and I’ve been riding ever since. 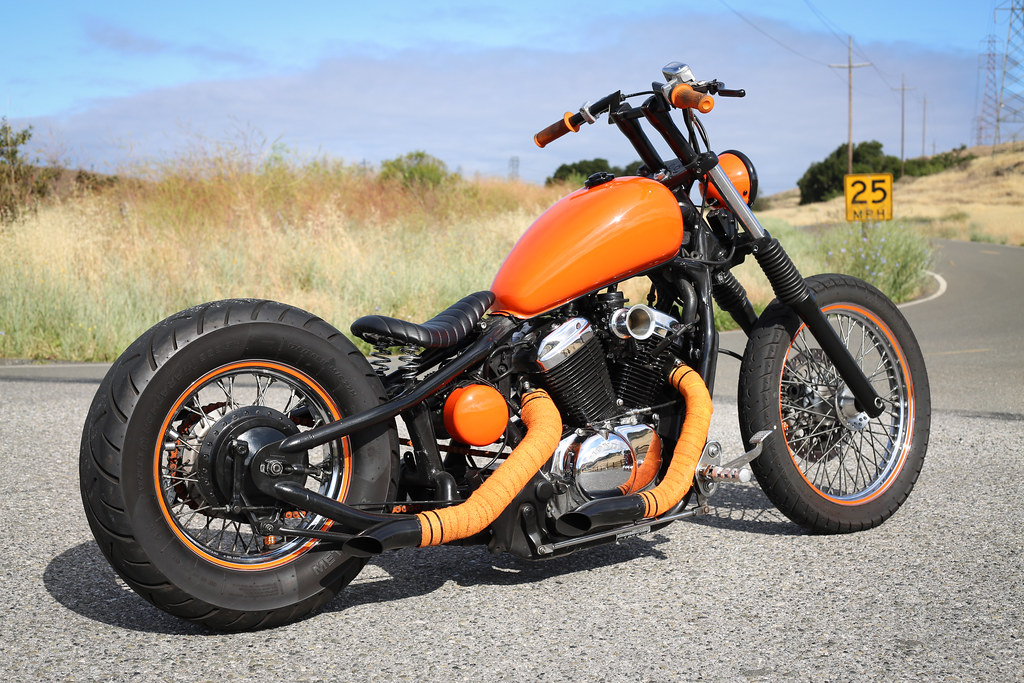 Out of all the motorcycles to choose from, why did you specifically choose a Honda Shadow?

My good friend Mikey Nguyen told me about his Honda Shadow bobber and how he rode with a bunch of guys. Initially, I didn’t think much of it, because I didn’t really know what a bobber was. One night he brought it to the gym and I thought it looked ridiculous (in a good way). As I stood there admiring the bike, a couple of older guys came out of the gym and started to do the same. I knew there was something unique about it. He told me he built it and it wasn’t really that costly. Mikey mentioned how all of the guys rode Honda Shadows, but you would never know, because everyone added their own personal touches. I was really intrigued how the same bike could look so drastically different. A few months later I found my life becoming really monotonous. I needed a new hobby, something different, so I called him up, told him I was thinking about building one. A few weeks later he went with me to look at a bike down in Morgan Hill. The guy I bought it from said a few other people had already been down to buy the bike and were ready to give him the cash without even looking at it. He mentioned how he didn’t want to sell it to them because he knew they were just going to chop it down. I pretended like I didn’t know what he meant. I told him it was my first cruiser and I wanted to buy the bike so I could get used to the feel before I upgraded. I wasn’t really trying to scam the guy, but that’s sort of how it played out haha. He even knocked off a few hundred dollars for me. 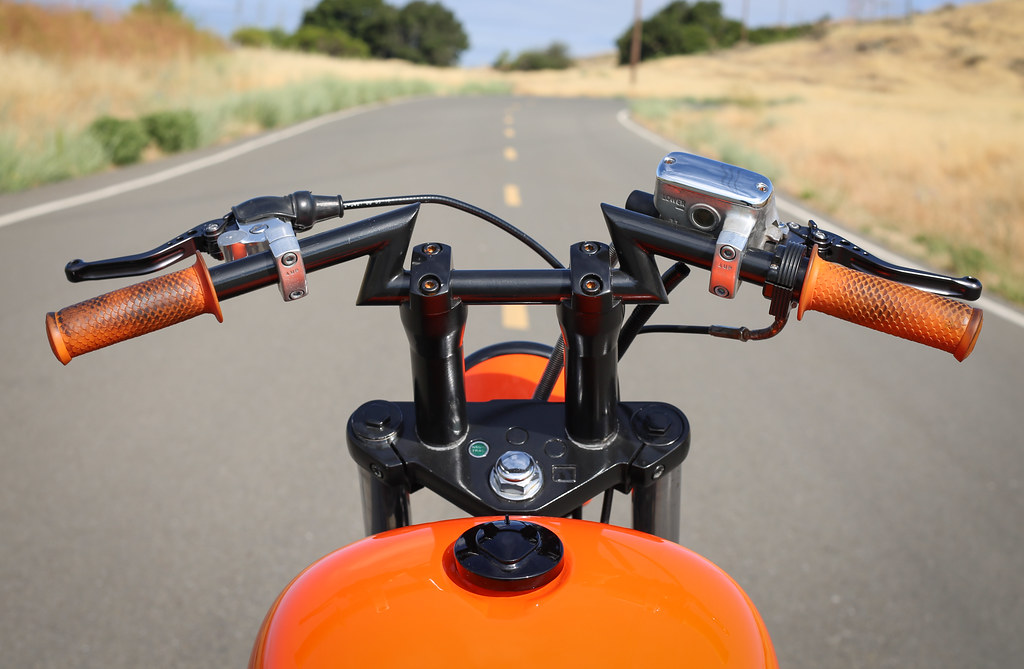 What went through your head when you went down for the first time?

I popped up the front tire on my first R6 and couldn’t sit the bike back down, primarily because I wasn’t trying to do a wheelie so I wasn’t prepared. When changing gears the bike slipped into neutral and then back down into first with the throttle open. I just let go of my bike. I remember everything kind of changed into slow motion. One second I was staring up at the beautiful blue sky, the next I was upside down. I could see my bike in front of me turning and flipping, fairings shattering, and pieces flying in every direction. Luckily I was able to walk away and I was back on craigslist that night, looking for another bike. I haven’t gone down on my bobber, however, while going southbound on 87 , at about 70 mph, my chain snapped and smacked me in my back. I thought I had been shot. Fortunately it was pretty cold that day and I was layered up. I had an imprint of the chain bruised into my skin, but it went away in about a week. I’ve also been through three license plate brackets and about six taillights on my bobber. You kind of expect issues to arise when you are on your bobber though. 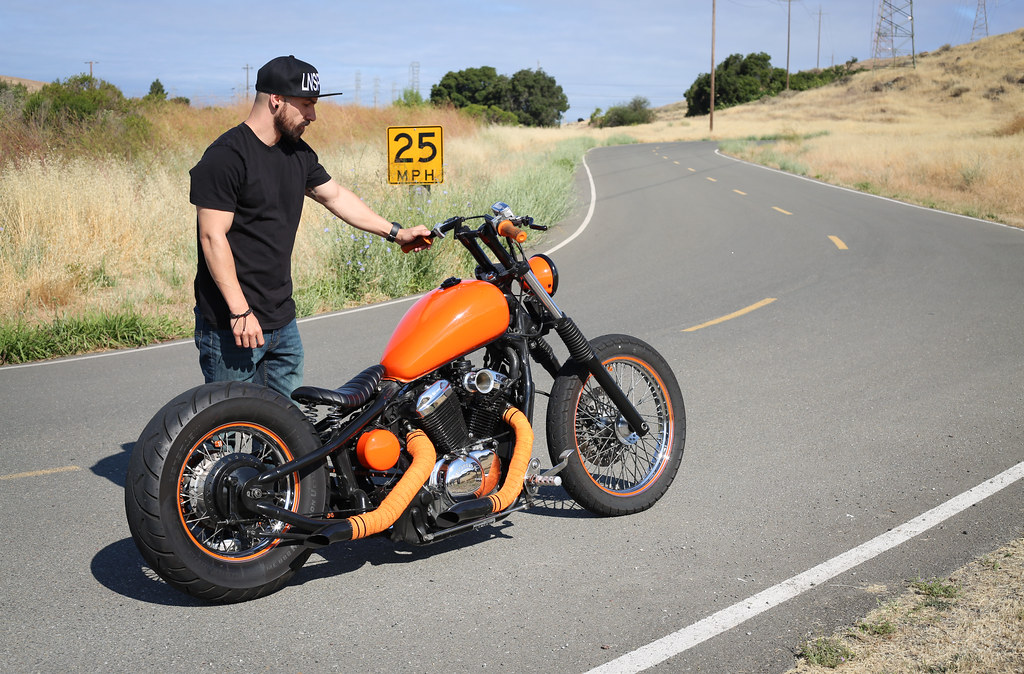 Between your sports bike and your bobber, which bike would you prefer?

Without a doubt the Honda Shadow. It’s not the fastest thing, but that allows me to enjoy my surroundings. Plus, there is something really rewarding about riding a bike that you built. Most people don’t understand that unless they’ve done the same. My dad has a 2015 Harley Street Glide and always offers up his bike for my rides. I’ve turned it down every time. 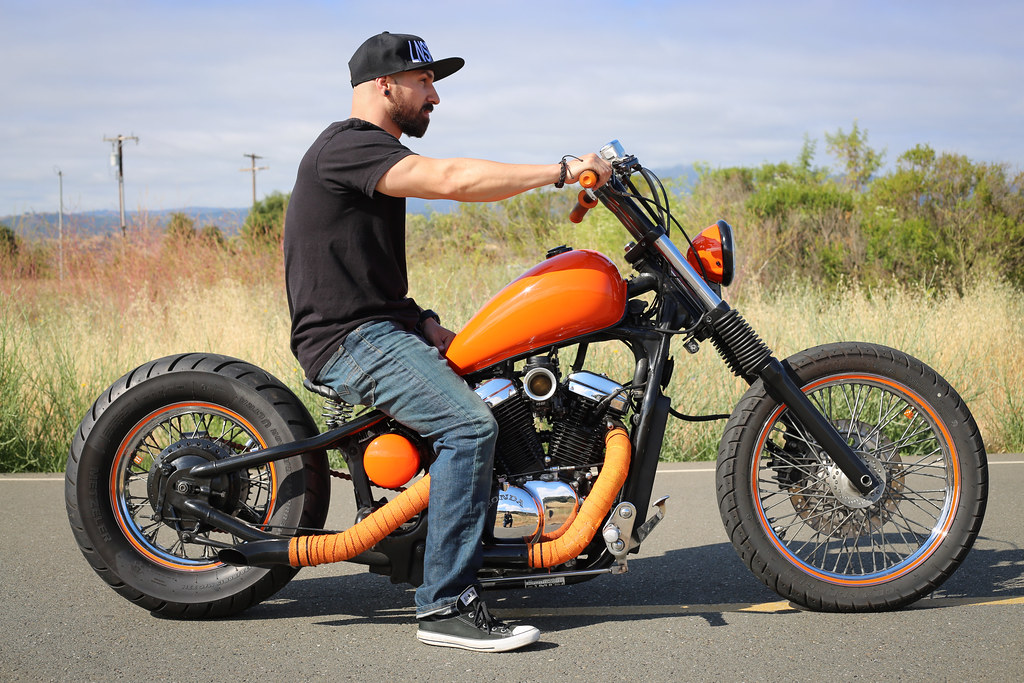 Do you enjoy riding by yourself or with a group? Why?

Definitely with a group. I ride solo all the time. Sometimes I ride to work or the gym or just to clear my head. Everyone is always busy and has their individual stuff going on, so when we get a chance to get together it’s rare. I truly appreciate that time together. The comradery and brotherhood is special 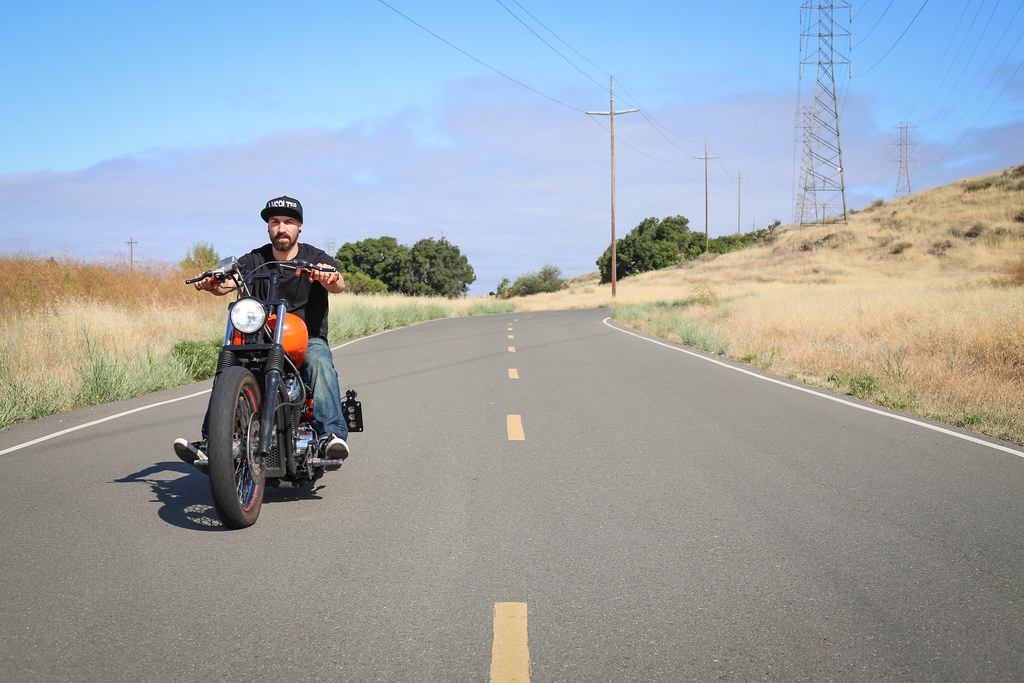 The funny thing is I’m actually not a big fan of the color orange, but I’m a HUGE San Francisco Giants fan. I’ve been a fan for as long as I can remember. My dad used to take us to games out at Candlestick every year. I remember he would change the grades on my sister’s report card, because if you got a certain GPA you could get in for free. I try to go to as many games as I can nowadays, usually 10-20 every season. At the end of June I finished the original build and the tank was raw metal, gathering rust. Everyone asked me if I was going to paint it. I wanted to paint it black, but a lot of the guys already had black themed bikes, so I told myself that if the SF Giants made it to the playoffs I’d do an orange and black scheme. The Giants went 10-16 during the month of June so I never thought they would make the playoffs, let alone win the World Series haha. After I had the tank, oil tank, and headlight painted orange I wasn’t happy with the overall appearance. I felt it was missing something. It needed more orange and it needed more black. So I added the orange chain, orange grips, painted the chrome on the head light black, the chrome tips on the exhaust black, added orange reflector tape on the wheels, and wrapped the exhaust orange. I think there is a good balance of both colors now. 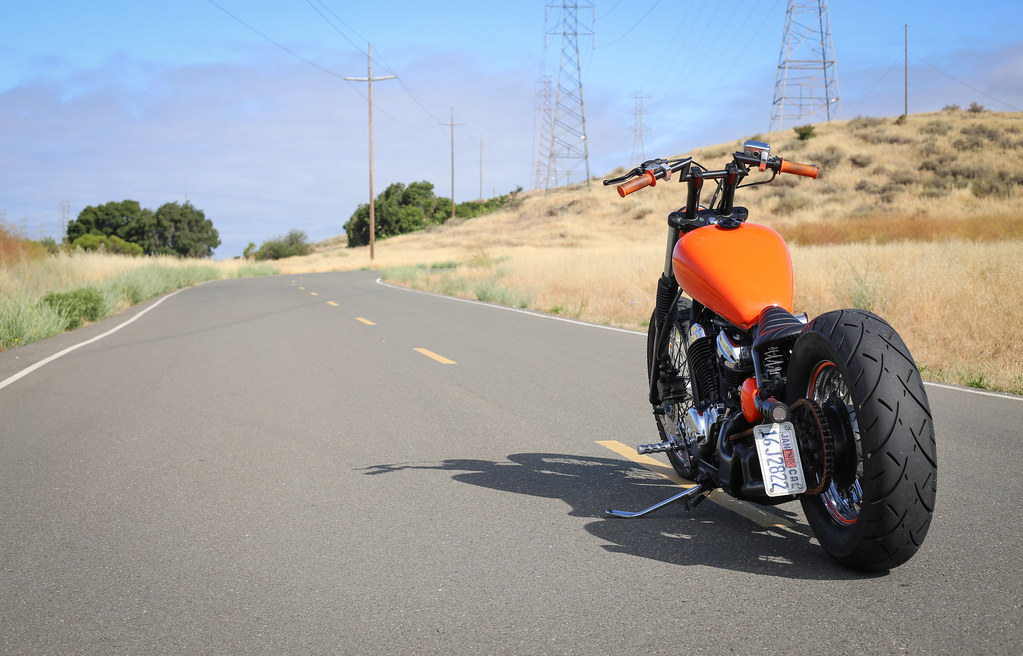 What do you enjoy most about riding your bobber?

To be honest it isn’t so much about riding as it is the things that have come along with it. At the beginning I had no idea that I would be a part of something so positive. I thought I would buy the bike and Mikey would help me chop it down and then that would be the end of my journey. Since I’ve built my bike I’ve met so many cool people that have been a positive part of my life. Guys that barely knew me would drop what they were doing to help me. And I’m not talking about just help with the bike. I’ve called on them multiple times for that and they’ve never failed me. Since building my bike I’ve seen over a half a dozen guys build their bikes and I can relate to the process. But I’m really talking about times that had nothing to do with motorcycles. They were there for me when a close cousin of mine passed away, there for me during the holidays when I wasn’t able to spend time with my family, and there for me during the celebration of my 30th birthday. I could go on and on. At the end of the day it has very little to do with riding, and much to do with the selfless and genuine relationships developed in our LNSPLTBVLD family. 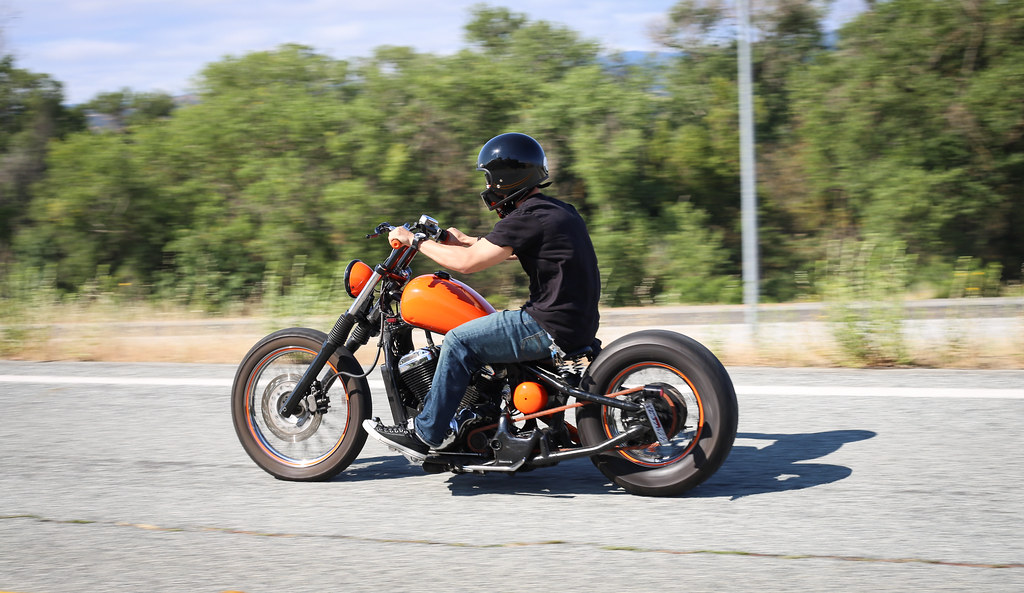 What are your future plans for the bike?

My bike is a work in progress, as are most bobbers. I’d eventually like to go suicide with mid-pegs. I don’t have a garage so big projects like that usually revolve around the free time of other LNSPLTBLVD guys. I’m not sure if I’d ever sell it since it is my first build, but I’d definitely like to build another one sometime soon. 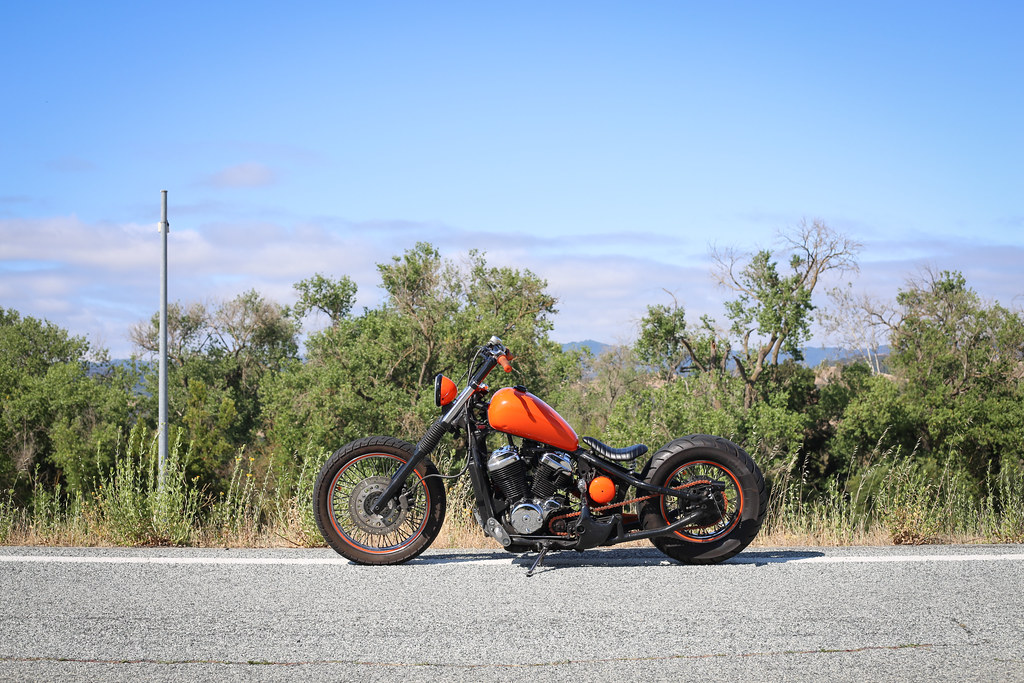 I did name her. Initially I didn’t because I knew the identify of the bike would change. Even when the SF Giants won the world series and I began to change it from raw rusted metal to orange and black I had trouble deciding on a name that would fit. I wanted a feminine name that could also double as something that was significant and powerful. I had built this bike and it was something I was proud of. I felt like I was doing a disservice to my bike leaving it without a name. I would pass by it everyday, sitting there at the top of my driveway, nameless. Well, I listen to a lot of sports talk radio, KNBR to be specific, and I heard this word over and over again…that word was DYNASTY. I thought that it was a perfect fit! The word itself embodies something powerful. Something long lasting. The SF Giants (black and orange) theme fit perfectly. And thus Dynasty was born. 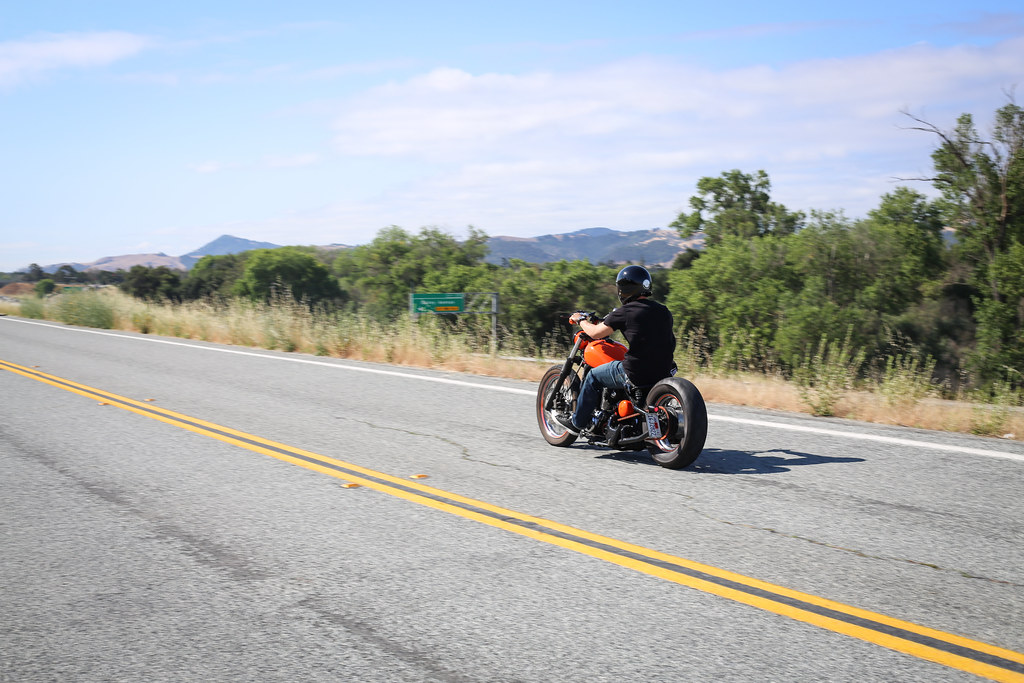 Any tips for newbies?

Surround yourself by positive people and remember it’s okay to make mistakes. The LNSPLTBLVD/Legion Cycle guys have been extremely supportive and helpful. When I first started building my bike in May 2014 my knowledge of motorcycles was very limited. I made sure to ask a lot of questions along the way. I remember building my bike in Mikey’s garage and guys I had never met would come over to check it out. They ended up helping me out with a lot of things. A year ago I didn’t know what a carburetor was or what it really did. Now I can remove mine from my bike in less than 10 minutes. It’s definitely a learning process. Troubleshooting comes pretty natural to me, so taking things apart and putting them back together is the way I learn things. That is essentially the first majority of a build. Once you do that you’ll know how your bike works.