I’ve been asked many times with the same question, “Why Suicide?”

A few of us from San Jose Bobbers will be attending Born Free 5 in Silverado, California. We are planning to tow our bikes down and ride in the streets of Southern California. Contact us if you want to caravan.

Here’s a video from Born Free 4

See you guys there! 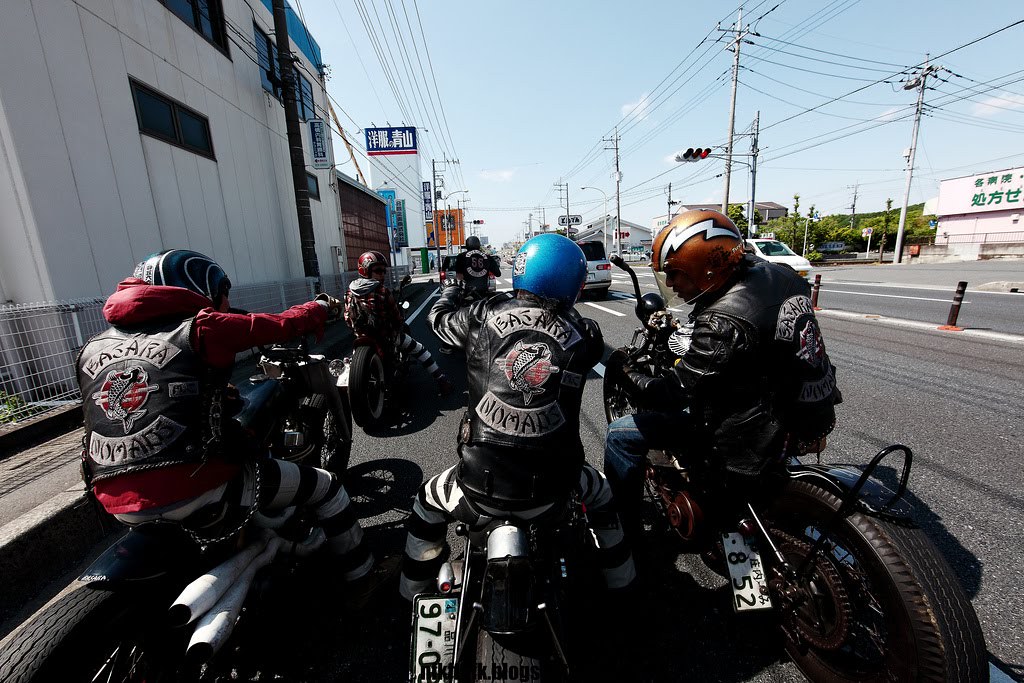 Do you remember several years ago when all those collectors were throwing a big hissy fit because all of those Harley frames and motors where being shipped over to Japan?
Well, thank God no one cared enough to have their mommy legislate against exporting!

Because now, they are being beaten within an inch of there lives roaring through the crowded streets of Tokyo and blasted up mountain roads at 100 mph on a daily basis.
So now instead of never being ridden and sitting dry with no fluids in it so that it won’t leak on the hardwood floor it is being displayed on… any Ironhead, Shovel, Pan, Knuckle, or Flattie can expect a life of constant abuse in the land of the rising sun.
I don’t know about you, but that makes me say yes to free trade!

I’m so sick of seeing the same polished up Panheads being rolled off of a trailer or pushed into a show at a low idle, with the overweight owner in some ridiculous pair of shorts and sandals, counterfeit Cohiba in mouth, straw hat on his head, Hawaiian shirt spotless and clean without a single stain from BBQ sauce (Cause, you know they have special shirts just for shows…and they have to make sure they match their paint job.)
Or how about the other extreme?

We’ve all seen it: the guy who talks the talk, who owns that sweet cut down rigid, running all the right mods, has all the right cues…but it’s nothing more than an aesthetic “theme” for him.

Sure he’s running a jockey shift on that sucker, yeah it’s got that super hot stroker in it, but he only rides it in a straight line, well under the speed limits, down to the bar, or to shows, or to the “clubhouse” to hang out with his fellow “hardcore chopper buddies.” There is no difference. The one is as guilty as the other.

I long for the day when I can see a righteous Pan, Knuck , Shovel or Flattie all stripped down and narrowed, slicing through traffic, blasting up the road to the show, passing on the shoulders, pipes up high away from the ground, mid pegs, narrow bars, short forks, the greasy rider/owner/builder lean and light from working a blue collar job and sweating all day, come flying up the road to a bike show, and skid to a stop in the gravel in the gutter, screeching and smoking the back tire…and get off and park that baby right next to the glistening resto…

Choppers were never meant to be long and useless…they were meant to be urban assault vehicles. Short, tight, light, and right. Getaway machines. Evasion, speed, performance…these were part of the formula for building a great chopper.

At what point in history did returning a vintage Harley back to stock and treating it like a fragile sculpture become the norm?

When did people stop seeing them as a solid platform for a urban assault vehicle?
I mean you can surely find a handful of Shovels being built and used that way…but the Pans, Knucks and Flatties?

The Japanese get it. They understand perfectly. Just look at this small club based out of Osaka called the BASARA MC. The BASARA was started by a guy named Akihiro Inoue who rides a 54 Panhead with no front brakes.

There is no president in BASARA, but all of the members really like Akihiro. My good friend MotoYan from Tokyo told me about the first time he saw a BASARA member:

“I first met Ito-san (The owner of the blue “Hot Wheels Panhead”) in 2004. I was riding my bike in the city one night after a party had gotten over. I saw this guy in front of me riding a blue Panhead like a lunatic.

I could see his bike had high-mounted Frisco pegs and when he turned he was going very fast he didn’t even brake…and sparks were shooting everywhere! I was like; Wow! This guy is insane! I found out later that was Ito-San. I met him at a club and he was always laughing and having a great time. Good guy. I liked him right away.

I met Cherry-San at the same time (The owner of the Panhead with the white high pipe)… he was always with Ito at this club. Oddly enough Cherry was not a member of BASARA until 4 years ago. Ito and Cherry had ridden together for 15 years and one day Ito realized that Cherry had never became a member of BASARA and quickly remedied the problem. Some members of the BASARA ride mainly in the mountains on the winding roads, they always ride very, very fast. When I ride with them it is nothing to see 90-100 mph all the time.

And these guys are real good riders too! Their bikes are all set up for those mountain roads. High pipes, Frisco pegs, high performance motors. All a result of their riding environment. All high speed, high function. Others like Ito-san ride in Tokyo traffic.
And everyone rides a jockey shift, rigid vintage Harley. No Evo’s.

BASARA is not set up like a Outlaw club in the States. It has no president, no rules and they don’t always run together. When I ride with them it reminds me of a squadron of WWII fighter planes blasting into battle! The sounds, the vintage iron, the formations they ride in. And their riding style is very kamikaze.

They always ride fast, with lots of lane splitting, and they don’t run very strong brakes! They just don’t ever slow down! The name BASARA is the name of a Japanese god who’s name means Bad Boy.”

I had Yan ask Ito-san and Cherry–San some questions for me and this is what they had to say.

–How many members are in BASARA?

–How does someone become a member of BASARA?

There are no rules to join the club but, basically you need to be accepted by
members or need to be nominated????
Someone can’t just decide he wants to be a member and ask. He has to LOVE his own bike and has to be able ride long distances. He can’t be a liar or a poser. And he has to have a good sense of humor!

–What kind of bikes do the BASARA members ride?

We don’t regulate this. We don’t have rules on the kinds of bikes.
But they need to build it themselves. Beat up, nasty, dirty, no registration.
Putting brand new parts on is cowardly. Besides, we don’t like to put on anything. We just like to take off parts.

–What is your riding style?

Freestyle. Bikes must not break down.

–Why do you all ride rigid frames?

We never think about it I guess, we have always rode rigid’s and never ride other bikes. We think rigid frames are normal.

–Do you have rules about your modifications?

We chop but don’t like “Custom” stuff.
We use parts that someone gave us, or cheap parts We don’t have money to spend on parts!

–Why do you ride so hard?

What do you mean? We ride safely!

What is so fun about riding vintage bikes slowly?

–Do you have anything you would like to say to the Church of Choppers readers?

Yeah, the bikes you guys built are now running wild in the streets of Japan

–When did you buy your Panhead?

–Where did you buy it from?

I found it sitting in a friend’s garage!

–Why do you run Frisco pegs instead of forward controls?

Because I can ride much faster with Frisco pegs. Better ground clearance!

–Why did you chose to build a Panhead instead of other Harley motors or other types of motorcycles?

Because Panhead’s are so F’ing cool man!

–Is there anything that you would like to change onyour bike?

–Is the Panhead your only bike?

–What do you like about riding fast in the mountains?

I just love riding in the mountains!

–What magazines or books did you look at to get inspiration for building your chopper?

AKIRA! (AKIRA is a epic Japanese Manga that is set in the future about a group of young bike punks who battle their rivals on motorcycles on the streets of Tokyo.)

MotoYan is no stranger to riding fast or in dangerous environments himself. He is a member of the No Future Krew in Tokyo. (You may have seen the little clip of them in the Jason Jessee movie “Pray For Me”.)

The NFK ride all sorts of Harleys, British bikes and Japanese bikes but all ride them very fast and through all sorts of traffic in Tokyo. Laneplitting, curb hopping, sheet metal surfing , burnouts, slides, skids, and stunts are all common place to the NFK. It takes a lot to impress a member of the NFK and the BASARA have done just that.

I for one would do just about anything to get to see that spectacle first hand. To see righteous vintage iron being modified for performance…but on the cheap, and then being flogged hard in situations that you simply don’t see choppers in anymore. Or better yet to get to ride with a group like that.

To have some real camaraderie instead of having to talk to guys about polishing chrome, Corbin seats, tasseled saddlebags, and about casting numbers on NOS parts. People, choppers aren’t about long front ends, way out there forward controls, stupid riding positions, the tallest bars, the lowest bars, wide tires, restoration or historical accuracy.

It’s not about a “theme” or making sure it all “flows”. It’s not about how many pike nuts you can bolt onto your bike, or how good that heat wrap looks on your pipes. Sure you can build them that way if you want… but they have ceased to be choppers to me at that point. You leave out the performance, the speed, the careful design with function as the number one goal…and you are building something else.

Call it what you will…but it ain’t a chopper to me anymore. With any luck, maybe some of these guys will become illegals over here and we can get some class imported back into our choppers.

Article written by Ben Bird and John “Flynch” Thompson with photos by Motoyan.